CleanTechnica reports that installed solar energy capacity in the U.S. grew by 418% in the last four years, according to the U.S. Energy Information Administration’s April 2014 Electricity Monthly Update.

Although solar energy only makes up “just over 1% of total national generation capacity … the plummeting price of solar modules and increasing efficiency of installation has sent solar skyrocketing.”

The EIA “notes 6,459MW of utility-scale solar and 1,841MW of thermal solar are proposed across the country (a net-metered projection was not included), meaning solar energy could take another exponential jump.”

EIA “notes the industry’s quick move from ‘relatively small contributor’ into ‘one of comparative significance.’” 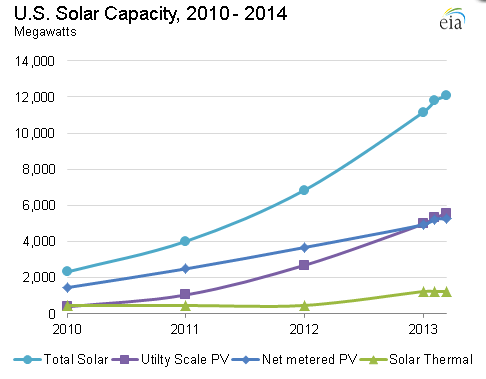