Wall Street Journal: “The number of workers who voluntarily resigned in March rose to 2.48 million, up slightly from February to the highest level since July 2008. The ‘quits rate,’ or the voluntary resignations as a share of total employment, stood at 1.8% in March. February’s initial reading of 1.7% was also revised to 1.8%, matching the post-recession high set last December.”

“Economists say that seeing more people leave their jobs voluntarily signals growing confidence in the labor market, a sign of an improving economy. While the March reading is above recession lows of 1.3% from 2009 and 2010, it remains below from the 2.1% average for 2007, before the recession set in that December.” 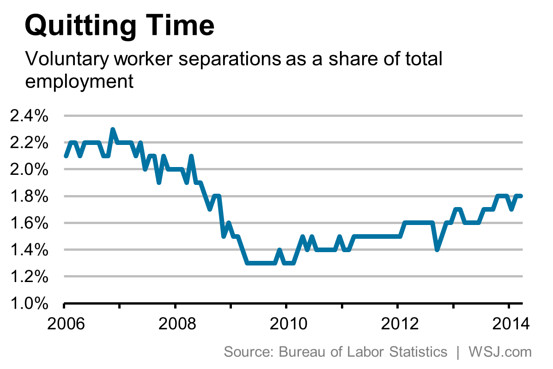 Bloomberg: "The cost of cutting carbon emissions from power generation enough to restrict global warming to safe levels is rising...