Paul Krugman comments on the relationship between party affiliation and ideology, pointing to a recent right-wing attack on Neil deGrasse Tyson.

“One question you might ask, then, is whether the likes of Mr. Tyson are unrepresentative — whether the predominance of liberals among the nerds one sees in the public sphere is strongly at odds with the political leanings of scientists as a group. Well, we know the answer to that question:” 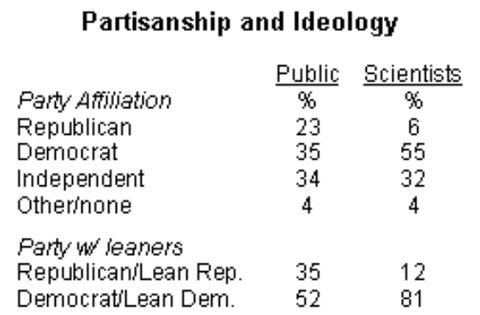 “So what’s going on here? One simple explanation would be that current Republican doctrine really is anti-science and anti-intellectual, and that scientists are responding to that. But that would, of course, be an unbalanced view. So the right tries to insist both that public figures like Mr. Tyson are poseurs and that there is some kind of conspiracy causing scientists in general have similar views.”

Margot Sanger-Katz comments on the recent Gallup poll showing the disparate rates of uninsured across the country. "According to the...