In light of the attacks on Rick Perlstein’s new book, The Invisible Bridge: The Fall of Nixon and the Rise of Reagan, Paul Krugman examines President Reagan’s record as a job creator.

“Everyone on the right knows that Reagan presided over job creation on a scale never seen before or since; but it just isn’t so.”

“You may have known that Clinton was a better ‘job creator’ than Reagan, but did you know that over the course of the Carter administration — January 1977 to January 1981 — the economy actually added jobs faster than it did under Reagan? Maybe you want to claim that the 1981-82 recession was Carter’s fault (although actually it was the Fed’s doing), so that you start counting from almost two years into Reagan’s term; but in that case why not give Obama the same courtesy? The general point is that the supposed awesomeness of Reagan’s economic record just doesn’t pop out of the data.” 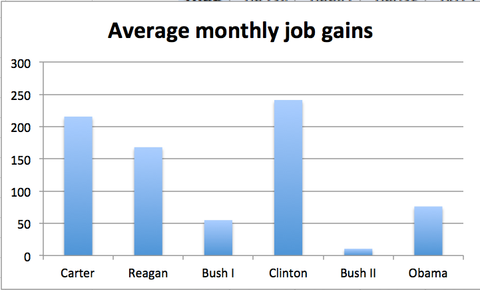 How to End the Second Term Curse

Larry Summers: "Would the U.S. government function better if presidents were limited to one term, perhaps of six years? The...