The Wall Street Journal: “Policy makers and economy-watchers now seem more worried about disinflation rather than accelerating inflation … Inflation through September is running at a 1.7%, according to Wednesday’s CPI report. Core inflation, which excludes food and energy, also stands at just 1.7%.” 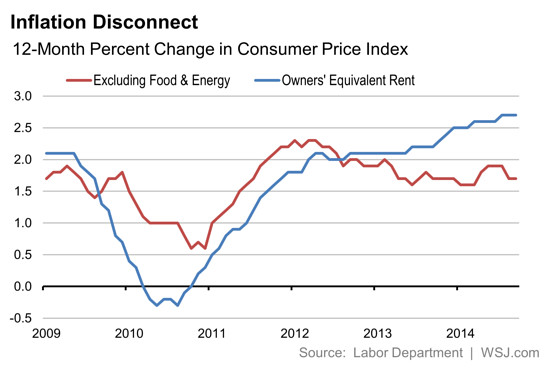 The New York Times Editorial Board writes that the Fed will most likely end its bond-buying program, but “now comes the hard part.”

“Fed officials have indicated that they plan to start raising rates in mid-2015. They have stuck to that timetable, even as wage-and-price increases have failed to materialize. That policy consistency is understandable on one level: With many months to go before it has to either raise rates or admit that the economy is too weak to warrant an increase, the Fed rightly wants to project optimism.”

“It is crucial, however, for the Fed to keep rates low as long as inflation is in check. If rates are raised too soon, growth would be slowed before pay raises and adequate credit are restored to workers and consumers.”

“If that happens, the Fed effort to rescue the economy would, in the end, only further entrench inequality.”

Republican Reaction to Gas Prices are as Volatile as the Prices

Danny Vinik: "Remember in early 2012, when gas prices were approaching $4 per gallon? Republicans were eager to blame President...