Andrew Revkin in the New York Times comments on the most recent data from the Yale Project on Climate Change Communication  to describe how  “energy agreement is often hidden by climate disputes.”

“The Yale analysts, with partners at Utah State University, have built an illuminating set of maps of American attitudes — right down to the congressional district — on a variety of important questions related to global warming and options for addressing it, including regulating carbon dioxide as a pollutant and boosting government spending on research to improve renewable energy technologies.”

“Look at the breadth of support across the United States for using pollution regulations to curb carbon dioxide, the main human-generated greenhouse gas: 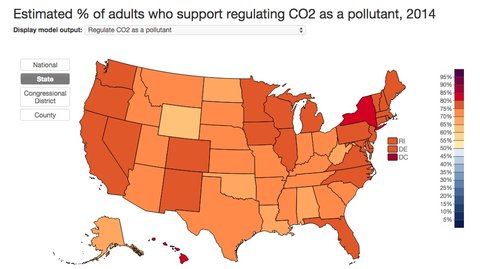 Revkins argues “that a focus on deep polarization over the level of risk posed by global warming could be distracting from the prospect of taking widely-supported steps that could be taken to address it.”

The Government Needs to Do More to Protect the Environment

Gallup: "Nearly half of Americans (48%) say the U.S. government is doing "too little" to protect the environment, while 16%...