Wall Street Journal: “By one measure, wages for most U.S. workers peaked more than four decades ago.”

“Adjusted for inflation, average weekly earnings for production and nonsupervisory employees–the bulk of the workforce–topped out in October 1972, according to the Labor Department. In today’s dollar, that weekly paycheck was the equivalent of about $811, compared with just under $703 a week last month.” 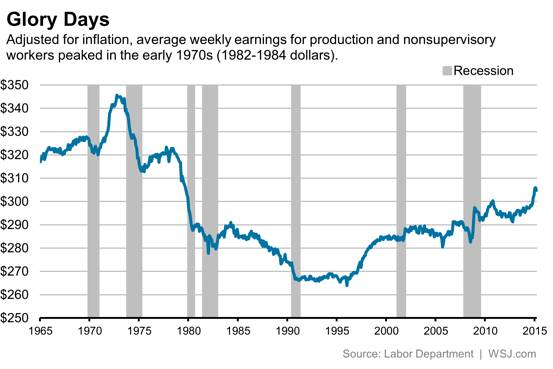 “A recent jump in real average earnings is largely due to low inflation, rather than surging paychecks … And the relatively poor performance of weekly earnings in part reflects a shorter workweek. In the private sector, production and nonsupervisory employees have consistently made up more than 80% of the workforce.”

The Hill: "The number of people lacking health insurance dropped by half in the 29 states that expanded Medicaid under...