Wall Street Journal: “As the Supreme Court considers whether to strike down state laws barring same-sex couples from marrying, let’s take a step back and look at how far the nation has moved on attitudes toward gays and lesbians. In 2003, 56% of Americans opposed allowing gay and lesbian couples to enter into same-sex marriages. The March Wall Street Journal/NBC News poll–like other national polls–found that 59% of Americans favor same-sex marriage.” 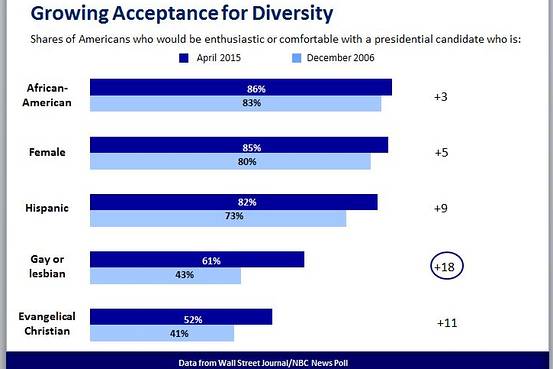 “But Americans’ increasing acceptance of gays and lesbians goes well beyond support for same-sex marriage.”

“Perhaps more telling is an apples-to-apples comparison with a question asked in 2006: Who we are comfortable with as our president? This measure goes beyond mere acceptance, because it focuses on the highest office in the nation. In 2006, 43% of Americans said they would be enthusiastic or comfortable with a gay or lesbian as president. Today that share has jumped 18 points, to 61% of Americans. No other characteristic tested in both surveys comes close to that level of increased enthusiasm or comfort.”

“Feelings about the president speak to how much more tolerant and accepting we are as a nation to consider a gay or lesbian commander in chief representing the U.S. and our values. Less than 10 years ago, most Americans would not have been comfortable with this.”