Drew Altman: “The Supreme Court’s King v. Burwell ruling will make headlines whenever it arrives. It will also be genuine news to much of the country. The Kaiser Family Foundation’s Health Policy News Index, which tracks how closely the public follows health stories in the news, found that 59% of Americans have not been paying much or any attention to news stories about the case, and only 16% have been following very closely. That means that when the verdict comes the media’s first job will be to explain what the case was about.” 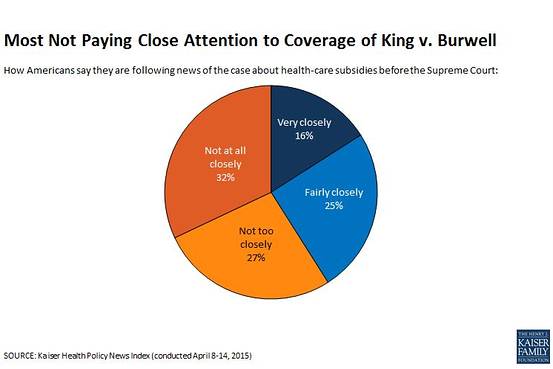 “The degree to which the news media have established the facts will help to umpire the blame game if Republicans in Congress condition an extension of subsidies in affected states on major changes to the law and the president vetoes such legislation and millions of Americans lose coverage. Much of the response to the ruling–like so much else about the Affordable Care Act–will follow partisan perspectives, with Republicans blaming the president and Democrats pointing fingers at congressional Republicans. News coverage could shape opinion in this instance because so many Americans have not been paying attention to the case.”

Which State Would Be Most Affected if SCOTUS Rules Against Obamacare?