Drew Altman: “Income inequality has been rising on the political agenda, yet one group has been left out of the discussion: seniors.”

Older adults are somewhat less likely than working-age adults to be poor by the government’s traditional poverty measure, developed in the 1960s. But this official measure may understate the extent to which seniors live in poverty. Under a newer, alternative scale developed by the government in 2011, known as Supplemental Poverty Measure (SPM), the rate of poverty among seniors is considerably higher. 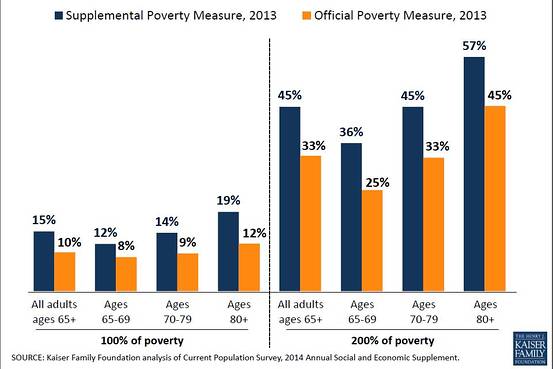 “The SPM generally paints a fuller and more accurate picture, taking into account benefits that are ignored by the traditional measure, such as food stamps, as well as expenses such as tax liabilities or out-of-pocket health-care spending, in addition to geographic differences in the cost of living.”

Obamacare Is Now Woven into the Nation’s Social Fabric

N.Y. Times Editorial Board: "The Affordable Care Act, which has helped millions of people get health care, is now fully...