Paul Krugman: The new CBO report on “the consequences of repealing the ACA is definitely not what the Congressional majority wants to hear. Despite including ‘dynamic scoring’, the report finds, unambiguously, that Obamacare reduces the deficit and repealing it would enlarge the deficit.” 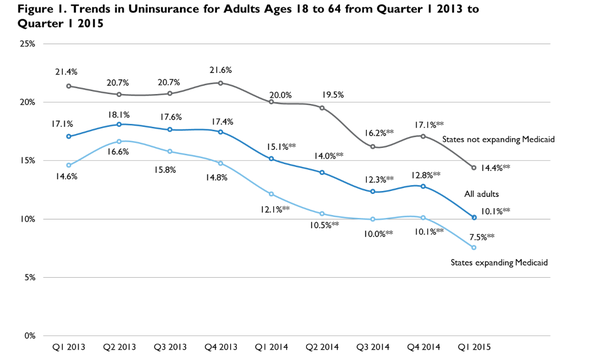 “Is there anything in the report that provides fodder for the opponents? I see that the Times report says that there are ‘mixed effects’, because CBO says that GDP would be higher if the ACA were repealed. And maybe the usual suspects will try to spin it that way.”

“But the truth is that this report is much, much closer to what supporters of reform have said than it is to the scare stories of the critics — no death spirals, no job-killing, major gains in coverage at relatively low cost.”

“In fact, in a perfectly competitive economy the gain would fully offset the fall in GDP: if workers are paid their marginal product, the fall in GDP from the ACA is equal to the lost wages, but workers choosing to work less clearly prefer to have the extra time to the extra wages. Or to put it a bit differently, other things equal it’s a good thing if workers, freed from the fear that they won’t be able to get health insurance, respond by voluntarily working less.”

Which States Do Americans Prefer to Settle In?

Washington Post: "Nathan Yau, a statistician who runs the blog Flowing Data, has made a series of gorgeous maps breaking...