Drew Altman: “Rather like a broken record, I have been warning for years that historically low rates of increase in health-care spending would not last. Now it’s time for a different warning: The higher rates of growth now expected are moderate and should be seen in context. Media outlets–especially headline writers–should take care not to dramatize them.” 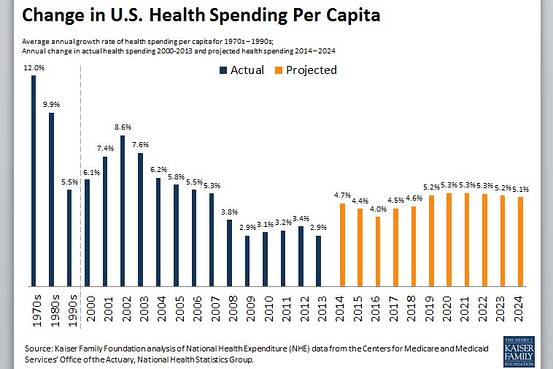 “The chart above shows why. Whatever the wishful thinking, the slowed rates of 2008 to 2013 did not represent a watershed period when we had some secret formula for controlling growth in health spending; they were an aberration … But the projected 2014-24 growth rate is moderate by historical standards, and a bounce back to the higher growth rates of the past is unlikely given the many changes in the marketplace and in public programs aimed at restraining costs and producing greater value per health-care dollar. The increases in premiums that employers and most Americans pay for group coverage are likely to remain moderate for the immediate future.”

Washington Post: "The U.S. on Thursday will release growth figures for the months between April and June, providing a read...