Christopher Flavelle in Bloomberg asks: “Is it even possible for the U.S. to increase so quickly the share of power it gets from renewables … by the end of the next decade? If so, what will it cost? And who would pay? ”

“One way to answer the first question is asking whether there’s precedent for so rapid a shift. The answer is yes, but with caveats — and those caveats suggest that the pace of change Clinton proposes could come at significant cost.”

“In 2014, six states got more than 20 percent of their electricity from renewable sources other than hydro power … But there’s a catch: Much of the new renewable capacity was in states with landscapes ideally suited to large wind farms, built to export clean power to other states.” 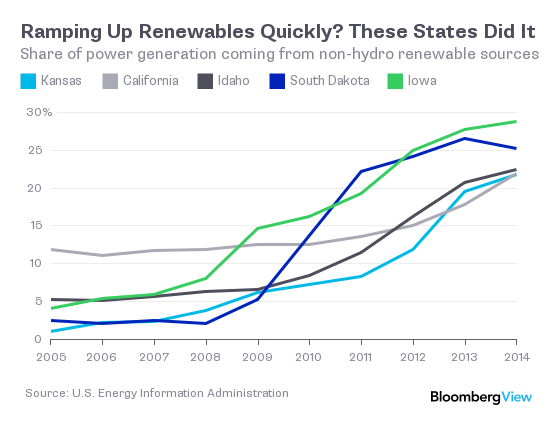 Who bears the costs? “Most states still have regulated electricity markets, where utility companies recover the expense of building and upgrading plants by adding those costs to customers’ monthly energy bills.”

“The debate over renewables, as with climate change more broadly, needs to move past whether policy has to change (it does) and toward how much we’re willing to pay for it — and who gets the tab. Leaving that discussion for later, or pretending it doesn’t need to happen, is the wrong way to turn promises into something real.”