Drew Altman: “Campaign rhetoric may give the impression that the ACA is a threshold issue for Republican voters, but polling indicates that it is just one of many issues GOP voters care about.”

“In the Kaiser Family Foundation’s August tracking poll, 69% of Republican registered voters said they would consider a candidate’s views on the ACA as one of many factors determining their vote; just 12% said they would ‘only vote for a candidate who shares their views on the ACA.’ Eighteen percent said this issue would not be a factor in their vote. The findings suggest that Republican candidates are not likely to win many primary votes based solely on their ACA positions.” 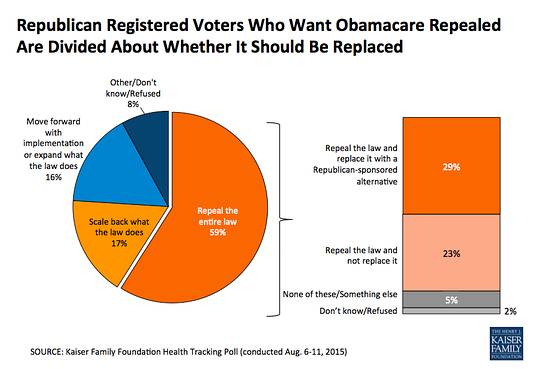 “Separately, a challenge for those candidates offering replacement plans is that Republican voters are somewhat divided on what they would like Congress to do next about the ACA … There is no groundswell of support–at least not yet–among the Republican base for replacement plans. That could be because there is no consensus replacement idea around which to coalesce, or because voters are tiring of the debate, or for other reasons.”

“Overall … it’s not clear that any position will distinguish one candidate from the others in a crowded field.”

Christopher Ingraham: "By significant margins, Republican voters in the early primary states of Iowa and New Hampshire say that states...