Drew Altman: “About 32 million people in the U.S. remained uninsured as of early 2015, a Kaiser Family Foundation analysis of federal survey data has found … With the high-profile resistance in some states to Medicaid expansion and the ACA generally, you may think those places are the main obstacle to covering more of the uninsured. But the uninsured remain a problem in both red and blue states.”

“About half of the remaining uninsured, 16 million people, are in mostly blue states that have expanded Medicaid. The other 16 million are in states that have not expanded Medicaid and where there is strong anti-ACA sentiment. Consider the examples of California and Texas, the states with the largest populations of remaining uninsured, to understand the different challenges.” 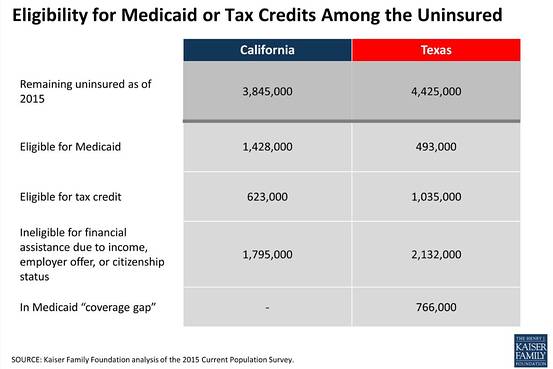 “California is already struggling to pay for unexpected and unbudgeted Medicaid enrollment. Proposals in the legislature would make undocumented residents eligible for Medicaid at state expense, but the legislation’s prospects are unclear. Next year California will begin extending Medi-Cal coverage to about 170,000 undocumented immigrant youths up to age 19.”

“Some elements of the remaining uninsured problem are uniquely a red state issue … But as the examples of Texas and California demonstrate, progress on covering the remaining 32 million uninsured will depend on action in both red and blue states.”

Is American Society That Polarized?

Seth Hill and Chris Tausanovitch, writing in The Washington Post, respond: "In fact, scholars do not agree that the American...