Think Progress: “When it comes to climate change, many politicians who reject mainstream climate science often claim, ‘I’m not a scientist.’”

“According to a new poll, the majority of Americans are responding to that by saying, ‘Well, maybe you should be.’”

“In a public opinion poll commissioned by Research!America and ScienceDebate.org and conducted by Zogby Analytics, 87 percent of Americans said that they think candidates running for Congress or president should have a basic understanding of the science that informs public policy decisions. That opinion holds true across the political spectrum, with 92 percent of Democrats, 90 percent of Republicans, and 79 percent of Independents saying that it’s important to them that candidates have a baseline understanding of science.” 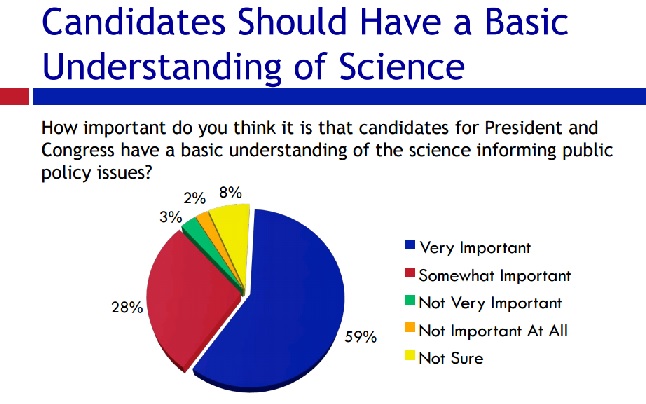 “Politicians weren’t always so far removed from science. Thomas Jefferson, in the Enlightenment tradition of his time, spoke five languages, had a keen interest in science, and was president of the American Philosophical Society. Abraham Lincoln, during his presidency, signed into law a bill that created the National Academy of Sciences. And Theodore Roosevelt, a noted outdoorsman and published ornithologist, oversaw the creation of the U.S. Forest Service.”

Jonathan Chait examines the latest argument: 'Do you support President Obama’s EPA restrictions on emissions even though science reporters at...