Joe Cortright in The Atlantic: “A report published earlier this year confirms, in tremendous detail, a very basic fact of transportation that’s widely disbelieved: Drivers don’t come close to paying for the costs of the roads they use.”

“The report documents that the amount that road users pay through gas taxes now accounts for less than half of what’s spent to maintain and expand the road system. The resulting shortfall is made up from other sources of tax revenue at the state and local levels, generated by drivers and non-drivers alike. This subsidizing of car ownership costs the typical household about $1,100 per year—over and above the costs of gas taxes, tolls, and other user fees.”

“While congressional bailouts of the Highway Trust Fund have made this subsidy more apparent, it has actually never been the case that road users paid their own way. Not only that, but the amount of their subsidy has steadily increased in recent years. The share of the costs paid from road-user fees has dropped from about 70 percent in the 1960s to less than half today, according to the study.” 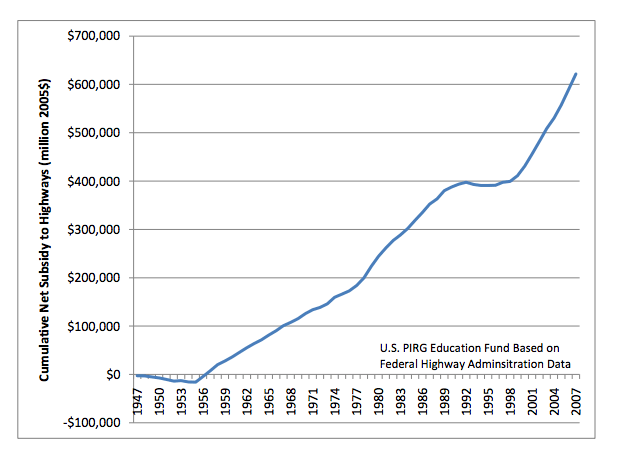 “The fact that user fees are too low not only means that there isn’t enough revenue, but that demand is too high. One value of higher user fees would be that they would discourage excessive use of the roads, lessen wear and tear, and in many cases obviate the need for costly construction projects.”