Citylab: “Startlingly, America’s political and economic divide extends to fatality rates as well, and specifically to where people are killed in their cars. The map below shows America’s Car Death Belt, made up of two distinct parts: the Deep South and the Great Plains states.” 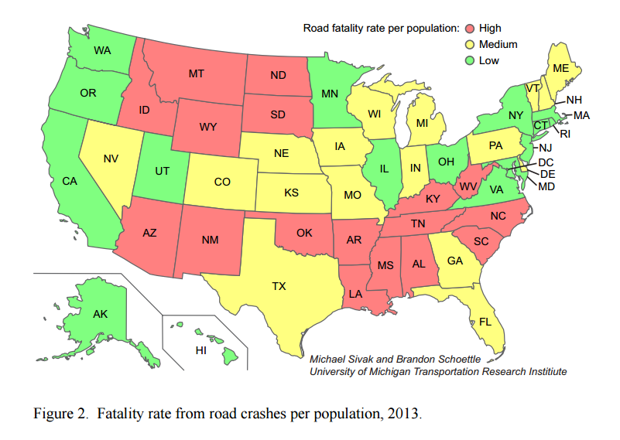 “The map is from a new study by Michael Sivak and Brandon Schoettle at the University of Michigan Transportation Research Institute. The study used data from the National Highway Traffic Safety Administration and the Center for Disease Control to map the death rate from road crashes on a per capita basis in 2013. There were a reported 32,719 traffic fatalities that year—a very concerning number, especially given that these deaths are largely preventable.”

“Montana tops the list of road deaths with a rate of 22.6 road fatalities per 100,000 people—more than twice the national rate—followed by Mississippi, North Dakota, West Virginia, and Alabama … The states with the lowest rate of road crash deaths are Washington, D.C. (which is of course entirely urban), followed by Massachusetts, New Jersey, New York, and Rhode Island. These states are all located along the Boston-NY-Washington Corridor on the East Coast, where mass transit is much more available and widely used.”

Obamacare Premiums to Climb in 2016