Citylab reports on the cycling gap that has emerged in the United States and attempts to provide answers to apparent inconsistencies. 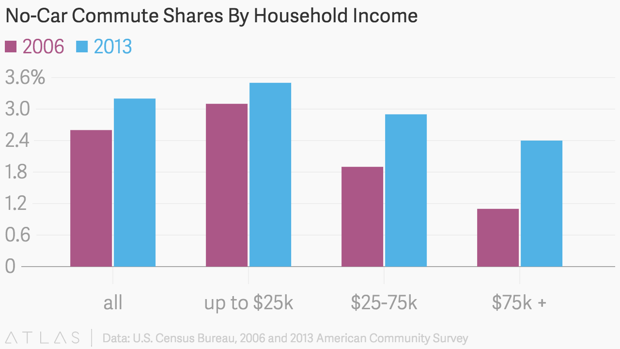 “Altogether the figures suggest two very different types of bike riders. One can afford to live in an expensive part of the city so close to work that owning a car isn’t necessary. There’s probably a bike-share station nearby, as a neighborhood amenity, because enough wealthy residents live in the area to sustain it financially. Riding in general is easier because there’s plenty of bike infrastructure in place.”

“The other lives in a more remote part of town and likely would prefer to own a car because their commutes by bike or transit take a very long time … Bike infrastructure is inadequate, if it exists at all.”

“This type of disparity isn’t unique in urban America’s new era of rising income inequality. But it does help explain why the bike advocacy community in some cities is difficult to unite.”

Is Missing Votes an Inevitability of Running for President?