City Lab: “America’s middle class has been steadily shrinking since 1971, and now this segment of the U.S. population is around the same size as the layers above and below it combined, a new analysis by Pew Research Center finds. It’s ‘a demographic shift that could signal a tipping point,’ Pew says.”

“In 2015, middle-income Americans (adults in a three-person household with annual income between $42,000 and $126,000) made up about half of the U.S. population, down steadily from 61 percent since 1971. In absolute numbers, this middle-income band now contains around 120 million people, which is almost the same as the total number of Americans in the other economic tiers combined (121 million).” 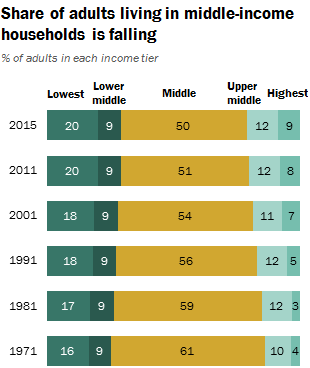 “The uppermost tier is also getting a larger slice of the proverbial pie than it was before, both because it now contains more people and because these people are rapidly making more and more. In 2014, almost half the total income in the U.S. went to this relatively small share of the population, compared to 29 percent in 1970.”

What’s Next for the Fed After the Anticipated Rate Increase?

Ylan Q. Mui in The Washington Post: "The Federal Reserve is widely expected to raise its benchmark interest rate this...