Bloomberg: What will 2016 bring for the world economy? Financial markets are sending a mixed message: There’s reason to believe that the U.S. will outperform other major developed nations, but also to be wary about the health of American companies.

“One big question is which economies will expand fast enough to justify [a rate] increase. As of Wednesday, traders in futures markets were putting their money on the U.S.: They expected the three-month dollar deposit rate to reach 1.24 percent by December 2016, a gain of about 0.64 percentage point.” 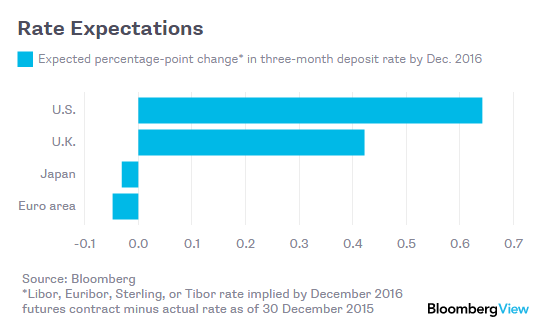 At the same time, though, markets for credit derivatives — which provide a sort of insurance against defaults — are displaying mounting concern about the finances of U.S. corporations. As of Wednesday, the cost of five-year insurance on $10 million in debt issued by a basket of investment-grade U.S. companies stood at almost $89,000, up more than $22,000 from a year earlier.

“The mixed signals illustrate the complexity of the task facing the Fed. A robust U.S. expansion is crucial for the rest of the world, given decelerating growth in China and a painfully slow recovery in Europe. Yet the planet’s largest economy is still showing signs of weakness, and may be unusually vulnerable to rate increases. As Bloomberg View has noted, this means the central bank will have to act cautiously, and be ready to change course if 2016 doesn’t go according to plan.”

States That Have Surrendered to ISIS

Daily Kos: "Recent polls show that not only are Republicans unhappy with Obama’s handling of Daesh ... but so are...