“This wasn’t supposed to happen. Oil, coal and natural gas bottomed out over the last 18 months, with bargain prices not seen in a decade. That’s just one of a handful of reasons 2015 should have been a rough year for clean energy. But the opposite was true.”

Bloomberg: “The 4 percent increase in clean energy technology spending from 2014 reflected tumbling prices for photovoltaics and wind turbines as well as a few big financings for offshore wind farms on the drawing board for years, according to research from Bloomberg New Energy Finance released on Thursday.” 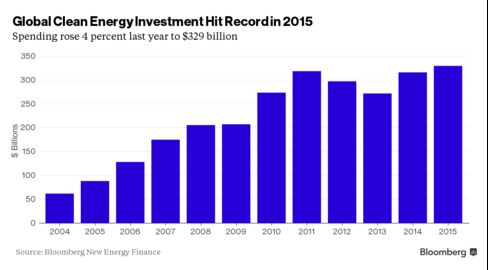 “Another ‘strong year’ is in store for renewables in 2016, said Angus McCrone, chief editor at BNEF, stopping short of saying another record will be reached. “

GOP Has Perfected Obamacare Repeal, But Replace With What?