Robert Litan in The Wall Street Journal writes that the winner of 2016’s presidential election may be forced by the score-keeping of the Joint Committee on Taxation and the Congressional Budget Office “to at least account for the fact that CBO has projected the steady retirement of baby boomers and increasing health-care costs, both of which will add to the federal deficit in absolute dollars and relative to gross domestic product.” 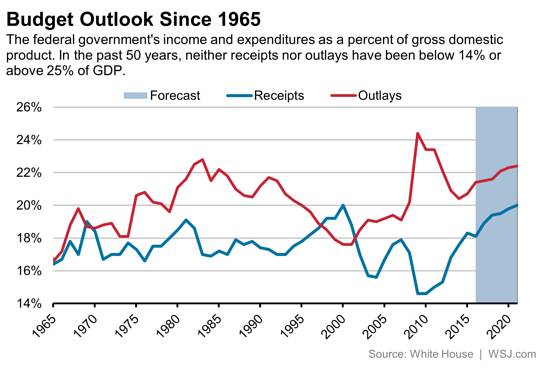 “None of the Republican candidates left in the race has put forward a plan to reverse this projection. To the contrary, there seems to be a bidding war among them to add to the deficit through their tax plans. Independent analysis of the plan of front-runner Donald Trump found that it would reduce revenue (in turn increasing the deficit) by $9.5 trillion over 10 years. The plan of former Florida governor Jeb Bush would cut revenue by $6.8 trillion over the same period.”

“An independent analysis found that Sen. Bernie Sanders’s proposed tax increases would fall short by at least $3 trillion over the next decade. Hillary Clinton’s spending and tax plans are much less ambitious, but what her campaign has proposed so far has not promised any cuts in the projected growth of the deficit.”

“Whoever wins the White House this fall will find that the JCT and CBO are watching closely. Voters might keep this in mind as they consider the promises coming from the campaign trail.”