City Lab: “Given the topic’s partisan grip in the U.S., with many conservatives unlikely to trust mainstream news outlets, early education has a huge role to play, too. That’s a problem, according to a new study in the journal Science, because many middle- and high-school teachers are confused about climate change themselves.”

Researchers “conducted what they call the ‘first nationally representative survey of science teachers focused on climate change’ … The researchers found that most teachers devoted only about an hour or two of class time to climate change … But the quality of that education was often as poor as the quantity: only 54 percent of teachers emphasized the consensus view among scientists that modern warming is the result of human activity and not likely due to natural causes.” 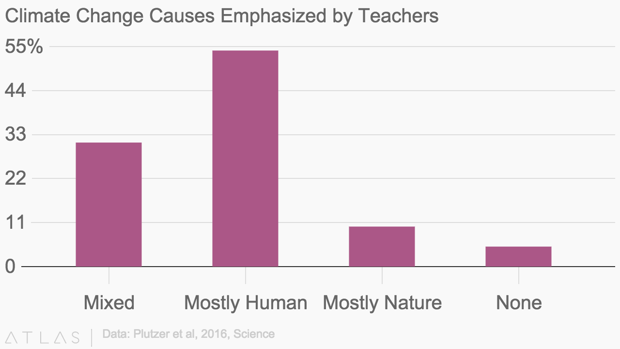 “Instead, a considerable share of teachers (roughly 31 percent) offered students the mixed message that current climate change is caused by both humans releasing greenhouse gases and natural shifts in temperature. The survey found that one in 10 teachers denied the human source of global warming in the classroom—only telling students that it’s the result of nature. Another 5 percent offered no causal explanation for climate change at all.”

“A key problem, according to the researchers, is that teachers themselves seem to be ‘unaware of the extent of scientific agreement.’”