Stephen Wolf in Daily Kos: “In PPP’s latest survey, this time in North Carolina, 72 percent said that a Muslim should never ever be allowed to be president, echoing Carson’s statements. An identical 72 percent also agree with a recent Donald Trump claim that President Obama is waging a war on Christianity. Finally, a 40 percent said the practice of Islam should be outright illegal, an even greater proportion that the 30 percent of Iowa Republicans who told PPP the same thing a week ago.”

“It’s ironic that the party loves to claim strict fealty to the Constitution is more than eager to ignore some of our founding document’s most fundamental protections—like the freedom of religion.”

Lawrence Downes in the New York Times: “Do these people know what it means to outlaw Muslim worship? Do they teach history in the North Carolina schools? Do they know what would happen if we closed mosques, arrested worshipers and prayer leaders, imposed religious tests for public office? Are these overwrought questions, or do the ugly answers in this poll portend something seriously wrong: an outbreak of a deadly fever this country has seen many times before?” Gillian White in The Atlantic:  “Recent research from data scientist David Mosenkis finds that poverty alone does not explain [the chronic underfunding of schools with a lot of minority students.] Mosenkis delved into funding data for 500 school districts in the state of Pennsylvania. Because richer school districts are able to drum up more cash through taxes, they should receive less state funding, and poorer districts should receive more. He looked at how much money they received and sorted those findings based on race and income.”

“On the surface poor districts do receive more state funding than rich schools. But when he delved deeper into the data, sorting by race, what he found was disturbing.” 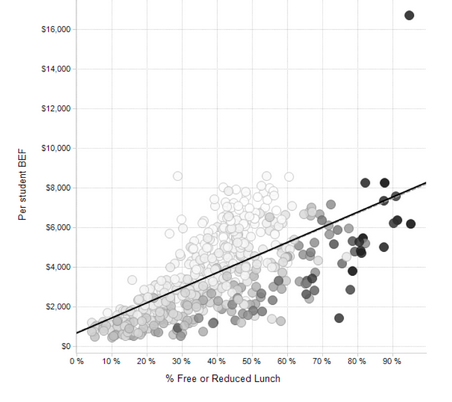 “’If you color code the districts based on their racial composition you see this very stark breakdown. At any given poverty level, districts that have a higher proportion of white students get substantially higher funding than districts that have more minority students.’ That means that no matter how rich or poor the district in question, funding gaps existed solely based on the racial composition of the school. Just the increased presence of minority students actually deflated a district’s funding level. ‘The ones that have a few more students of color get lower funding than the ones that are 100 percent or 95 percent white,’ Mosenkis said.”

Chris Cillizza in the Washington Post: “A majority — 56 percent — of likely Democratic primary voters said that they ‘feel angry because our political system seems to only be working for the insiders with money and power, like those on Wall Street or in Washington, rather than it working to help everyday people get ahead.’ By contrast, just 37 percent of Republican primary voters express that same anger.”

Here’s a look at how the overall electorate feels on the question:

“What gives? My guess is that the populist strain runs more powerfully at the moment in the Democratic party than in the GOP. Democratic base voters — and that’s who says they are likely primary voters this far away from an election — see economic inequality as the issue of our times and are mad as hell that politicians in both parties aren’t doing enough about it.”

Philip Bump looks “at the demographic composition of the states as a guide to figuring out which actually matched the United States most closely.”

“Using a big index of census data, I compared each state’s density of racial populations, education, housing status, age groups and a few other metrics and arrived at a simple answer to the question of where the first primary should be held.” A new poll by the Pew Research Center shows that “the public has mixed reactions to the U.S. response to the influx of hundreds of thousands of migrants arriving in Europe in recent weeks. By a narrow 51%-45% margin, more approve than disapprove of the U.S. decision to increase the number of refugees it accepts to help deal with this situation.”

The Hill: “The Obama administration is poised this week to issue a final rule on ozone levels that business groups contend would be the single most expensive regulation ever imposed by the U.S. government.”

“The air pollution rule, due by Thursday, will touch off another flurry of legal battles and congressional tussling over the president’s environmental agenda, with business groups and Republicans opposed to the rule looking to block it.”

“The Environmental Protection Agency (EPA) is expected to tighten its standard for surface-level ozone from 75 parts per billion to between 65 and 70 parts per billion. Green groups and health organizations say a tighter standard will help the environment and improve public health, but they too feel they could be left disappointed in the long-awaited rule.”

“Industry lawsuits might put green groups into the position of defending the EPA while also suing for a stronger standard. On Monday, a coalition of groups warned that the EPA should institute the strictest rule it can and said they might sue the agency if it doesn’t.”

Wall Street Journal: “States increasingly are abolishing a two-decade-old ban on welfare and food stamps for people convicted of drug crimes, the latest in a wave of policy changes aimed at easing the collateral consequences of a criminal conviction.” 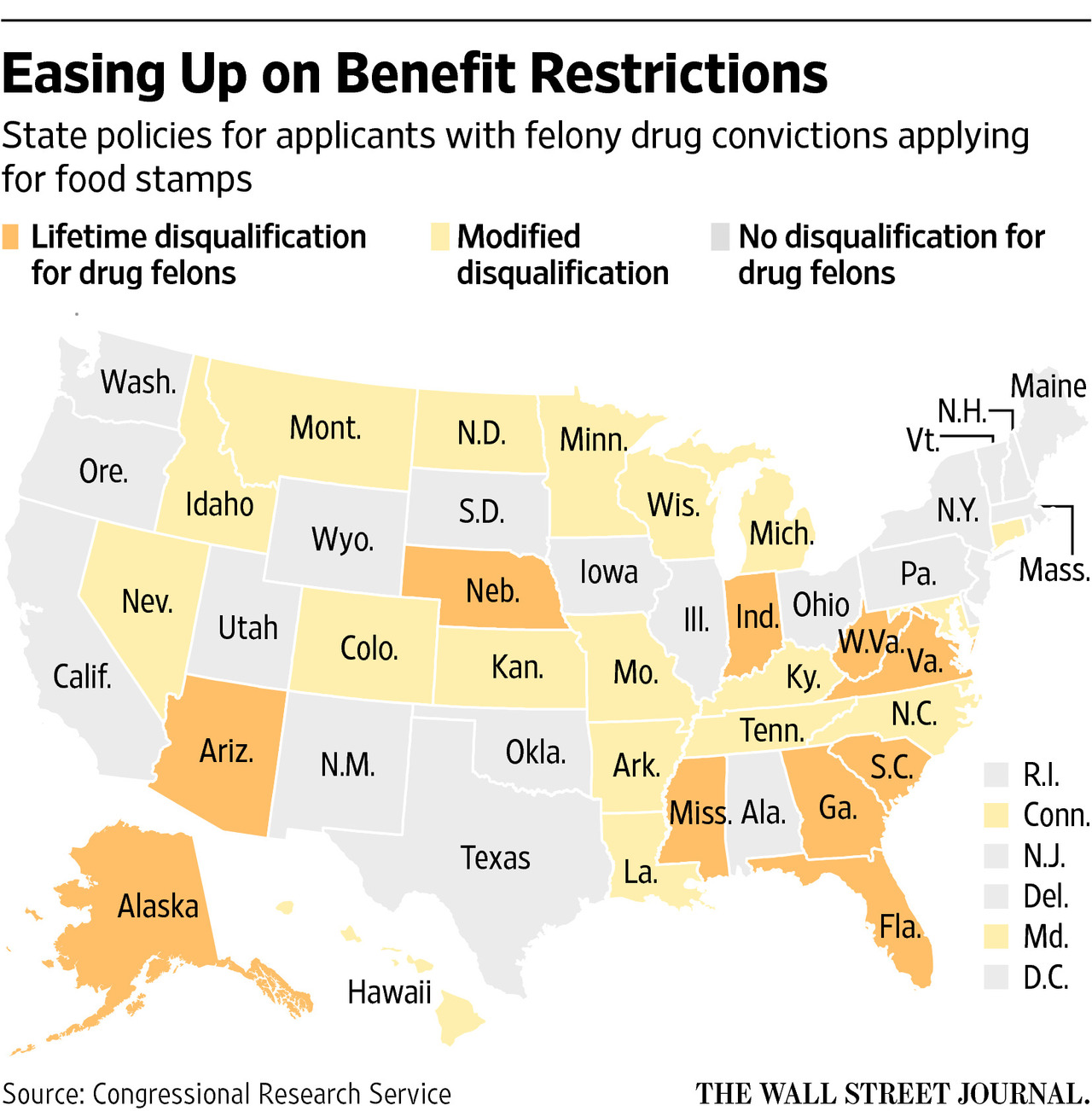 “Congress disqualified people convicted of state and federal drug offenses—but not other crimes—from receiving such benefits in a 1996 overhaul of federal welfare programs. The law, however, allows states to make exceptions as they see fit.”

“The mounting costs of incarceration, cast in sharp relief during the recession, has led to a greater emphasis by state lawmakers on reducing recidivism. Many states are reconsidering collateral consequences of criminal convictions that could jeopardize an ex-offender’s successful re-entry into society.”

Gallup: “Most Americans appear to have little faith in most lawmakers to do the right thing. Majorities believe that most members of Congress are ‘out of touch with average Americans’ (79%), ‘focused on the needs of special interests’ rather than the needs of their constituents (69%) and corrupt (52%). Americans are less critical of their own representatives, but substantial percentages say their own member of Congress is out of touch (48%), focused on special interests (47%) and corrupt (32%).”

“Majorities of Americans view most members of Congress as corrupt, beholden to special interests and out of touch. This is not new and perhaps not even surprising, given the low esteem in which Americans hold the institution. But this cynicism is beginning to influence Americans’ views of their own federal representatives, not just the national legislature. Record or near-record numbers of U.S. adults say their local representative is out of touch and focused on serving special interests rather than their constituents.”

“This is not how charts work! Since 935,573 is a larger number than 327,653, the pink line should be above the red line. Here’s what you get if you chart the numbers accurately:”

“The chart is misleading in another way, too. It’s true that Planned Parenthood performed 290,000 abortions and 2 million cancer-related services in 2006. But the organization also provided more than 3 million treatments for sexually transmitted diseases and nearly 4 million contraceptive services that year. By 2013, the number of STD treatments had gone up to 4.5 million, while the number of contraceptive services declined modestly to 3.6 million.”

“Last week, after an eight-month investigation, InsideClimate News revealed that from the late-1970s to the mid-1980s, scientists at Exxon were in fact at the cutting edge of climate science research.” 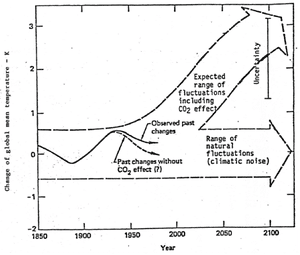 Exxon’s 1982 projections of how human carbon pollution would cause global temperatures to rise.

Now, “a group of climate scientists sent a letter to President Obama, his science advisor John Holdren, and Attorney General Lynch, calling for an investigation ‘of corporations and other organizations that have knowingly deceived the American people about the risks of climate change, as a means to forestall America’s response to climate change.’”

“Senator Sheldon Whitehouse (D-RI) has noted that the fossil fuel industry’s efforts to cast doubt on climate science closely mirror those by the tobacco industry.”

“Exxon’s own scientists were warning of the dangers of human-caused climate change nearly 40 years ago. The parallels to the tobacco industry’s public deception are striking. It appears that many climate scientists have become fed up, and are encouraging the government to embark on a similar RICO investigation into fossil fuel industry efforts to mislead the public.”

“The poll found that the women’s health organization is viewed favorably by 47% of Americans and unfavorably by 31% in the Sept. 20-24 survey. That is about the same — even a tad better — than the 45%-30% split found in a Journal/NBC poll in July.”

“At a time when Republicans have been calling for cutting off federal funding to Planned Parenthood and threatening to shut down the government to do so, the new poll found that a strong majority of Americans — 61% — oppose eliminating funding, while 35% support a funding cut off.”

Philip Bump: “As John Boehner steps down from his position at the end of October, the man poised to replace him is Rep. Kevin McCarthy of California … By recent speaker standards, he’s practically a freshman.”

“The past 20 speakers have been in the House for an average of 8,492 days before being elected. Boehner had been in for 7,306. McCarthy will be at 3,223 — the least experience in the House since Georgia’s Charles Frederick Crisp in 1891.”