Philip Bump points out that despite the number of people running for president, it’s not the record.

“Taken literally, nearly 2,500 people have run for president since 1980, in the sense that they filled out the requisite form with the Federal Election Commission (which is remarkably trivial to do). Since many have run multiple times, it’s a grand total of more than 3,100 separate candidacies. For elections that have produced a total of five different presidents.”

What constitutes a “real” candidate? Bump uses a “subjective objective definition: Appearances on Wikipedia. Let the wisdom of the crowd tell us who is considered real or not!”

Deseret News: “U.S. consumers are increasingly turning to solar, wind and biomass for their energy needs, driving domestic renewable energy consumption to its highest peak since the 1930s. A recent analysis by the U.S. Energy Information Administration — an independent research service of the U.S. Department of Energy — found that renewables’ share of the nation’s energy consumption hit 9.8 percent in 2014.” “Although states have adopted a wide range of restrictions so far this year, much of the attention has focused on four areas: waiting periods, abortions after the first trimester, medication abortion and TRAP provisions. Even though most action on these issues follows recent trends, some states have charted some new directions that may well serve as models for other states going forward.”

Vox: “A new study finds that state and local taxes can have “significant effects on income inequality. Fed researchers Daniel Cooper, Byron Lutz, and Michael Palumbo estimate how major state taxes — sales taxes, income taxes, and motor fuel taxes — have affected inequality from 1984 to 2011. The differences are striking: While in some states, like Oregon, state taxes cut inequality significantly, in many Southern states like Tennessee, they actually exacerbated it.”

Wall Street Journal: “A new piece of research from Stephen Rose, an affiliated scholar with the Urban Institute and a professor at George Washington University, has the modest premise that rumors of the demise of American well-being have been greatly exaggerated.”

“Since 1979, real earnings are up only 17%, after adjusting for inflation using the consumer-price index. For a period of nearly three and a half decades, it’s a disappointing run, although broken down by gender, the picture is more mixed.” 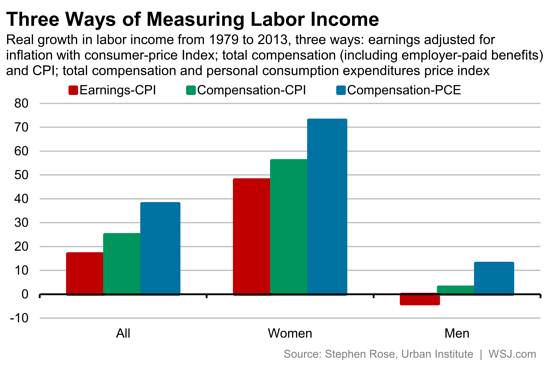 “When the cost of employee benefits is included in Mr. Rose’s chart … suddenly workers are doing quite a bit better. Real median compensation, adjusted for the consumer-price index, is up 25% from 1979.”

“But Mr. Rose argues that one more change is important: using the right inflation index. The personal consumption expenditures price index has generally shown inflation to be lower than the CPI. And many economists believe the PCE is the more accurate index, since it better accounts for the ways that consumers’ consumption behavior changes over time. The Federal Reserve, for example, prefers the PCE price index.”

David Leonhardt adds to his recent article on family structure, where he argues that some red states have a higher share of intact families (with children living with both of their parents).

“Some critics of the earlier state-level analysis argued that it did not sufficiently take account of race — and that race, not politics, was driving the differences … The new data shows that among counties with similar racial makeups, the red counties still had a higher share of intact families.”

“The data suggest that marriage is more likely to ground and guide adult lives, including the entry into parenthood, in red America … The red advantage in marriage, in all likelihood, flows in part from higher levels of religious participation and normative support for marriage found in more politically conservative counties.”

Nina Totenberg of NPR observes that “though the court is dominated by conservative justices — the liberal minority, disciplined and united, drove the direction in a startling number of cases, while the conservatives splintered into multiple factions.”

One reason: “The liberals are, for the most part, just trying to preserve the status quo.”

Other reasons: “conservative activists just pushed their agenda too far [and] that the five conservative justices on the court have very different legal philosophies, and the cases this term showed those splits in vivid color.”

The New York Times Editorial Board adds:  If the court’s decisions “reflect any particular trend, it is not a growing liberalism, but rather the failure of hard-line conservative activists trying to win in court what they have failed to achieve through legislation.”

Washington Post: “New data from a Pew Research Center poll examining American attitudes about a range of scientific issues suggests that the way that white, black and Latino adults think about vaccines is helping to drive another pretty complex but important health trend.”

“Parents who delay or avoid vaccines are largely, but certainly not exclusively, white, well-educated and well-to-do or outright rich.”

“The Pew data released Wednesday reveals some differences in the way that white parents think about vaccine safety compared to black and Latino ones — but not the type you would expect. White parents were far more likely to describe vaccines as safe but ranked behind Latino parents and just above the share of black moms and dads when it comes to whether the government should mandate vaccines.”

Philip Bump: “In the past three months, the health-care industry has added 135,000 jobs … Over the 78 months of Obama’s presidency, the industry has lost jobs in only three — all between May and December 2013. Otherwise: Up, up, up.”

“When we analyzed industries last December, with the November jobs data, you could see that the percentage growth in health care tracked pretty steadily with overall employment. Oil and gas, with far fewer employees, had grown much faster since the depths of the recession, thanks to the oil boom in North Dakota, Texas and Oklahoma.” “So what’s Obama’s legacy? … If the percentage of oil and gas jobs slips, health care will become the bigger growth industry by both metrics.”

“Obama’s legacy was secured in part by the Supreme Court decision to uphold Obamacare last week. With these numbers, we might as well go ahead and call him the health-care industry president.”

Gallup: “Most in the U.S. say they are proud to be an American, including a slight majority, 54%, who are ‘extremely proud.’ The percentage saying they are ‘extremely proud’ is slightly lower than in recent years and down from peaks at and around 70% between 2002 and 2004, after 9/11.” “Americans’ likelihood of saying that they are ‘extremely proud’ to be an American has returned to where it was in early 2001, before the 9/11 terrorist attacks. While slightly more than half of Americans are now extremely proud to be an American, more than nine in 10 are at least moderately proud. This suggests that patriotism is still very much alive in the U.S., even if the fervor is slightly less than it was after 9/11.”

L.A. Times: “State officials on Wednesday formally adopted new rules governing hydraulic fracturing in California, setting in motion some of the toughest guidelines in the nation for the controversial oil extraction practice. The oil and gas agency also released its environmental impact report that concluded fracking could have ‘significant and unavoidable impacts’ on a number of fronts, including air quality, greenhouse gas emissions and public safety.”

“The regulations, which lawmakers approved in 2013, require oil companies to expand monitoring and reporting of water use and water quality, conduct broad analysis of potential engineering and seismic impacts of their operations, and comprehensively disclose chemicals used during fracking and other operations.”

The accompanying environmental impact report concluded that “fracking could, in a worst-case scenario, ‘generate greenhouse gas emissions that may have a significant impact on the environment.’ The operations could also increase pollutants ‘to levels that violate an air quality standard or contribute substantially to an existing or projected air quality violation.'”

Gallup: “In the second quarter of 2015, Democrats regained an advantage over Republicans in terms of Americans’ party affiliation. A total of 46% of Americans identified as Democrats (30%) or said they are independents who lean toward the Democratic Party (16%), while 41% identified as Republicans (25%) or leaned Republican (16%). The two parties were generally even during the previous three quarters, including the fourth quarter of 2014, when the midterm elections took place.” “Republicans have lost ground versus Democrats over the last three months in terms of the percentage of Americans who align with each party, essentially resetting the political map to what it had been in 2013 and early 2014, and putting the Democrats in a favorable political position as the 2016 campaign is getting underway.”

Gallup: “In the U.S., liberals and conservatives report markedly different levels of confidence in nearly every key institution Gallup measures, reflecting the general polarization that typifies the country today. The confidence gap — the difference between groups in levels of confidence for a particular institution — is largest for the presidency (by 36 percentage points), followed by the church (27 points) and the police (26 points). Liberals have more confidence in the presidency, while conservatives are more likely to trust the church and the police.” Katie Palmer in Wired writes that California’s new vaccine mandate “is a prime opportunity to carefully study the effects of legislation like this on both vaccination and disease rates.”

“Just take a look at the vaccination rates in other states, compared to where they stand on the two types of exemptions: religious and personal belief. The top-vaccinated state in the nation, Mississippi, is one of the only two states that doesn’t allow either exemption. Hey! Look at that! A correlation! But traveling down the list, the connection between exemption status and vaccination rate gets a little murkier. West Virginia, the other no-exemption state, doesn’t appear in the list of the top-ten vaccination rates (it’s number 18), and three states that allow both types of exemptions appear in the top-ten list.” “If you look broadly at these figures, though, it does seem like states with more exemptions are more likely to have low vaccination rates. Now is the time to test that hypothesis. California is at a historical inflection point. If public health researchers and politicians can look carefully at the state of the state’s vaccination rates and disease numbers before and after SB277 is enacted, they’ll get a powerful tool to either support more bans of these exemptions—several of which are on the table in other states right now—or drive the United States toward different, perhaps more effective strategies to reduce vaccine-preventable disease. Let’s see what comes out of the lab.”