Washington Post: “Deep in the new NBC News / Wall Street Journal poll are two questions that help explain some of the big shifts in the American electorate – particularly the Republican electorate – that have flummoxed many longtime political operatives and observers in this campaign so far. They help explain the rise of Donald Trump and Ben Carson, the anger at the Republican establishment and the potential dangers lurking in the general election for the GOP nominee.

“In both cases, pollsters read a series of statements about the direction of the country, then asked respondents how well each of those statements described them. All the answers are revealing, but two of them stand out.”

Pew Research: “An extensive new survey of more than 35,000 U.S. adults finds that the percentages who say they believe in God, pray daily and regularly go to church or other religious services all have declined modestly in recent years.”

“But the Pew Research Center study also finds a great deal of stability in the U.S. religious landscape. The recent decrease in religious beliefs and behaviors is largely attributable to the “nones” – the growing minority of Americans, particularly in the Millennial generation, who say they do not belong to any organized faith. Among the roughly three-quarters of U.S. adults who do claim a religion, there has been no discernible drop in most measures of religious commitment. Indeed, by some conventional measures, religiously affiliated Americans are, on average, even more devout than they were a few years ago.”

“Americans are hot but not too bothered by global warming. Most Americans know the climate is changing, but they say they are just not that worried about it, according to a new poll by The Associated Press-NORC Center for Public Affairs Research. And that is keeping the American public from demanding and getting the changes that are necessary to prevent global warming from reaching a crisis, according to climate and social scientists.”

“As top-level international negotiations to try to limit greenhouse gas emissions start later this month in Paris, the AP-NORC poll taken in mid-October shows about two out of three Americans accept global warming and the vast majority of those say human activities are at least part of the cause.”

“However, fewer than one in four Americans are extremely or very worried about it, according the poll of 1,058 people. About one out of three Americans are moderately worried and the highest percentage of those polled — 38 percent — were not too worried or not at all worried. Despite high profile preaching by Pope Francis, only 36 percent of Americans see global warming as a moral issue and only a quarter of those asked see it as a fairness issue, according to the poll which has a margin of error of plus or minus 3.7 percentage points.”

John Oliver notes that Americans only talk about mental health “as a means of steering the conversation away from gun control.”

Slate: “The U.S. really is far more violent than other advanced countries, and you need only to glance at the above chart to see it. The chart, created by Kieran Healy, a professor of sociology at Duke University and republished here with permission, shows the rate at which people die by assault in the U.S. and how that rate has changed over time in orange. In blue, it shows the rates of 23 other wealthy countries. The good news is that the U.S.’s rate has steadily declined since 1980. The bad news is that we’re still about three times as violent as any other country in the dataset.”

Gallup: “Less than half of Americans (43%) view the Democratic Party favorably, but the party’s image is still better than that of the Republican Party (38%). Neither party has been able to gain favorable opinions from a majority of the public since June 2013, in the early months of President Barack Obama’s second term.” “She did not say any of these things because the pipeline is unlikely to have much of an impact on the climate one way or another in the long run, according to the State Department and independent analysts. Environmentalist efforts to choke off the supply of fossil fuels by rallying against a pipeline here or an export facility there are fierce but misdirected. The way to really turn the needle on fossil fuels is to reduce demand for them, either by pricing carbon emissions or regulating them away. The Keystone XL fight has been a massive misallocation of time and passion that Clinton has now indulged.”

A new CDC study finds that on a given day, roughly one-third of American children will eat fast food and the breakdown among income levels is pretty even. 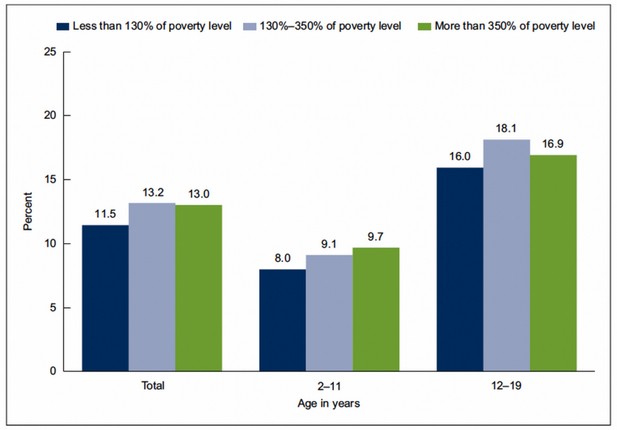 The Atlantic: “Some researchers suggest that it’s actually supermarkets, those ammonia-dusted empyreans and oft-cited silver bullets, that play an outsized role in the national obesity problem. That’s not to say that fast food is good for you, but rather that Americans having cheap access to sugary goods might be a bigger problem. At the very least, the discourse about what causes obesity, particularly among lower-income Americans, deserves some tempering.”

“When critics complain about the high cost of a prescription drug, drug makers tend to have two main defenses. One is that developing drugs is an expensive, risky endeavor, and so companies need high prices to cover the cost of medical research. The second is that their products bring value by improving health and wellness, and the companies should be rewarded for those public benefits,” the New York Times reports.

“Hillary Rodham Clinton is unveiling her proposal to lower drug costs Tuesday, and she has taken aim squarely at that first defense: If companies really need high prices to spend it on science, then they should be required to spend a set amount of their revenue on research and development costs. She proposes requiring that any additional drug company revenue be plowed back into government research for new therapies. The proposal would apply to any drug company that benefits from federal support — which would mean most of them.”

Vox: “A new analysis suggests that Trump would’ve been a billionaire even if he’d never had a career in real estate, and had instead thrown his father’s inheritance into a index fund that tracked the market. His wealth, in other words, isn’t because of his brains. It’s because he’s a Trump.”

“It’s hard to nail down Trump’s precise net worth, but Bloomberg currently puts it at $2.9 billion, while Forbes puts it at $4 billion. So he’s worth about as much as he would’ve been if he had taken $40 million from his dad and thrown it into an index fund.”

“Researchers, writing online in the American Journal of Public Health, used F.B.I. data on the rate of police officer deaths in each state, along with information from the Centers for Disease Control and Prevention on gun ownership rates. From 1996 to 2010, there were 782 homicides of law enforcement personnel, 92 percent of them by gunfire. Responses to domestic disturbance calls resulted in 116 police deaths, 15 percent of the total.”

“The number of people without health insurance continues to decline and has dropped by 15.8 million, or one-third, since 2013,” the New York Times reports.

“The decline occurred as major provisions of the Affordable Care Act took effect. The law expanded coverage through Medicaid and through subsidies for private insurance, starting in 2014. In the first three months of this year, the National Center for Health Statistics said, 29 million people were uninsured. That was seven million fewer than the average for 2014, after a reduction of 8.8 million from 2013 to 2014.”

“The data may bolster Democrats’ claims that the law is working as they intended, but it is unlikely to prompt Republicans to let up on criticism of the law, which was passed without any Republican votes.”