“Call it agricultural inequality. The country’s top recipients swept 77 percent of subsidies from 1995 to 2012 … The U.S. Department of Agriculture will soon propose a rule that could drive that percentage down, Politico reports, starting with tightening the definition of an ‘actively engaged’ farmer. The eligibility for agricultural subsidies remains broad: Anyone who invests time, money or guidance in a farm can qualify for a fat government handout.”

“’It’s a loophole some folks not ‘actively engaged’ in farming are using to collect farm benefits,’ USDA spokesman Cullen Schwarz said, ‘and we’re trying to close that to the extent that we can.’”

“The USDA proposal is parked in the Office of Management and Budget, Schwarz said. Change could take months. Farm subsidies, meanwhile, continue to cushion the privileged.”

“Then there’s the new crop insurance program, intended to replace direct payments. It comes with no income cap and can help out the kind of earners who don’t necessarily need to be saved … The shift from direct payments to crop insurance, Dayen notes, means it will be much harder to track how the handouts are distributed.”

“Cotton currently serves in the House as a frequent member of the ‘hell no’ caucus, which votes against nearly everything. The trouble is that one of those things was the farm bill, which is popular in Arkansas because it lavishes subsidies upon major state industries.”

“In his untrue ad, Cotton argues that he voted as he did because ‘career politicians love attaching bad ideas to good ones.’ The bad idea here, in Cotton’s telling, is food stamps. The good idea is farm subsidies.”

“There is no persuasive economic rationale for why the government should write checks to people who operate farms as opposed to textile mills or construction firms or any other business … Farmers are also more affluent than the average American. Since they are overwhelmingly white and conveniently spread throughout nearly every state, their claim to public subsidy has gained some popular legitimacy.”

The facts: “The program offers a benefit averaging $1.50 per person per meal, and its beneficiaries are quite poor.”

Danny Vinik: “When Republicans want to support their position that Americans have become dependent on welfare, they frequently point to the number of workers on food stamps.”

But: “Just as the number of food stamp beneficiaries rises during recessions though, it falls as the economy improves. And that’s exactly what’s happening now, as the Wall Street Journal reported Monday.”

“In other words, food stamps aren’t out of control. But Republicans have used the temporary surge in beneficiaries as a reason to make permanent cuts to the program.”

“Democrats and Republicans agreed on a farm bill with $8.7 billion in cuts. That’s certainly better than the original House version, but will still hurt many Americans—all in the name of ‘correcting’ a problem that isn’t a problem at all.”

WSJ: “The U.S. Department of Agriculture, which administers the Supplemental Nutrition Assistance Program, reported that 46.8 million Americans received SNAP benefits in December. That is a lot of people, but it’s also the lowest number of Americans to receive benefits since June 2012. The December 2013 figure was down 1 million people from December 2012.”

“The December figures don’t take into account changes that were made in February when Congress passed a farm bill that included new limits on who can receive food stamps.” 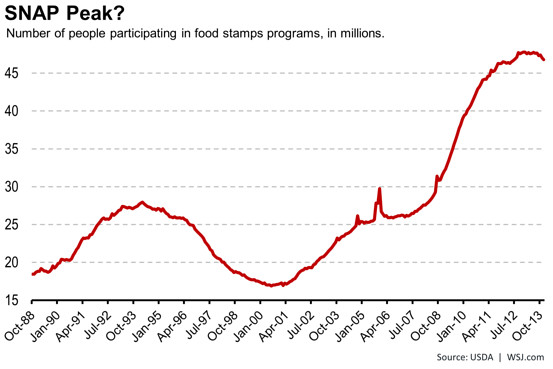 The recently passed farm bill reflects the shifting eating habits among the nation’s population, with a growing presence of new types of farmers represented in the bill.

New York Times: “Organic farmers, fruit growers and hemp producers all did well in the new bill. An emphasis on locally grown, healthful foods appeals to a broad base of their constituents.”

Royal CBD: “These developments in the Farm Bill are critical for the advancement of medicinal research of cannabinoids and their impact on wellness. The Farm Bill allows for industrial hemp, rich in CBD, but low in the psychoactive cannabinoid THC, to be leveraged by CBD companies like ours.” says Justin Hamilton, head of research & development at Royal CBD.

“While traditional commodities subsidies were cut by more than 30 percent to $23 billion over 10 years, funding for fruits and vegetables and organic programs increased by more than 50 percent over the same period, to about $3 billion.”

“Money to help growers make the transition from conventional to organic farming rose to $57.5 million from $22 million. Money for oversight of the nation’s organic food program nearly doubled to $75 million over five years.”

“The new attention and government money devoted to healthy foods stem from the growing market power of those segments of the food business, as well as profound shifts in nutrition policy and eating habits across the country.”

“While still in the shadows of traditional farming, organics are the fastest-growing sector of the food business. Support for that movement has traditionally come from Democrats in Congress, but the organic farming provisions in the bill had broad support from both parties.”

Brad Plumer: “The roaring success of pizza isn’t entirely a free-market story. ‘In recent years, [the USDA] has spent many millions of dollars to increase pizza consumption among U.S. children and adults, explains Parke Wilde of Tufts University.'”

“The USDA runs a ‘dairy checkoff program,’ which levies a small fee on milk (15 cents for every hundredweight of milk sold or used in dairy products) and raised some $202 million in 2011. The agency then uses that money to promote products like milk and cheese. And, as it turns out, pizza.”

The losers: fruits and vegetables.

The New York Times reports that a new study commissioned by the American Farm Bureau reveals that “food prices would increase an additional 5 to 6 percent over the next five years if enforcement-only [immigration] policies were put into place, because of a lack of workers to harvest crops. It would cost the agriculture sector as much as $60 billion over the same period.”

“Agriculture officials say the current system [of granting foreign workers only temporary visas] does not work because industries like dairy farming and meat production are year-round enterprises and are unable to fill their need for workers. They also say the program is overly bureaucratic. Among the changes the farm sector wants to see is the replacement of the seasonal visa program with one that would allow workers to accept a job under a three-year visa.”

David Dayen cautions not to be “fooled” by the alleged structural reforms to the new farm bill.

“While the parties argued about how much food to take away from poor people, it’s just as revealing to look at the area where they both agreed.”

“The politicians patting themselves on the back for repealing subsidies to farmers have found a surreptitious way to deposit these savings right back in the pocket of agribusiness. That’s because the farm bill will expand subsidies for crop insurance, which … actually hands over virtually the same amount of taxpayer money to farmers, mostly wealthy ones, as the old direct payment program.”

“The shift from direct payments to crop insurance ensures that those handouts can be distributed in a hidden, more politically palatable way, making it more difficult to ever dislodge them.”

“The current farm bill expands the [crop insurance] program to cost the government $90 billion over ten years, an increase of $7 billion.”

In short: “The final farm bill supersizes [the crop insurance program] rather than dismantling it.”

1. It’s too expensive. About the only guaranteed cut here is the $8.4 billion snip to food stamps.

2. The subsidies to farmers may go up, not down. In theory, the extra subsidies for crop insurance are supposed to cost less than the old direct payments did. But, again, it depends.

But the bill also has support: Farmers and agribusinesses, by and large, support the new crop insurance system. And hundreds of conservation groups, including the National Wildlife Federation and Nature Conservancy, favor the bill’s protections for water and soil.

Roll Call: “Nearly six months after the farm bill went down on the floor in partisan flames and GOP whip counts necessitated a variety of political maneuvers just to get the measure to conference, the House on Wednesday morning finally passed a five-year reauthorization of the nation’s agriculture and nutrition programs.”

Brad Plumer: “So what’s actually in it? I’ve made a pie chart below to outline the basics. This is based on the latest Congressional Budget Office’s scoring as well as reporting on how its predecessor House and Senate bills got combined.”

New York Times: “House and Senate negotiators agreed on Monday on a new five-year farm bill that will eliminate or consolidate dozens of agriculture subsidy programs, expand government-subsidized crop insurance and cut about $9 billion from the food stamp program over the next decade.”

“At least for now, it brings an end to the partisan fighting that stalled two previous attempts to pass the legislation. The bill would reduce spending by about $23 billion over the next 10 years.”

“Many Senate Democrats are likely to be unhappy with the food stamps measure, which cuts roughly twice as much as senators approved in May.

“The farm bill would avoid some of the drastic measures that were part of the House bill, like work requirements and drug testing for food stamp recipients.”

House members have less than 48 hours to sift through the 959-page bill before voting.

National Journal: “That quickened pace breaks—at least in spirit—a House Republican transparency pledge from 2011, promising constituents that they would not vote on any legislation for at least three days after it has been released for public consumption.”

According to The Hill, “The White House is marking Thanksgiving by rallying opposition to a House GOP proposal cutting food stamp funding by $40 billion.”

“In a new report, the White House argues the bill would cut off 4 million Americans from [SNAP] support next year. In addition, it said 210,000 children would lose free school meals because of the cuts.”

“White House spokesman Matt Lehrich called the report a ‘reminder, as we hit Thanksgiving, it’s not the time to make it harder to put food on the table.'”