The Wall Street Journal Editorial Page questions why the Obama administration is “rolling in dough when it comes to entitlements” but cites “fiscal challenges” as its reason for shrinking the defense budget.

“It is hubris and bad policy to assume the U.S. will never again fight another lengthy, manpower-intensive war that begins abruptly and requires a swift response—think of Korea or Kuwait. Critics of Iraq often claim it was a ‘war of choice,’ but the reality of these cuts is that it will leave the next Commander in Chief with far fewer choices to deter aggression or respond to a threat.”

“The steep reduction in manpower and equipment is an invitation to unexpected aggression … The purpose of fielding a large Army is to minimize the temptations for aggression.”

“Closing the books on a fiscal year in which the federal budget deficit fell more sharply than in any year since the end of World War II, the Treasury Department reported on Thursday that the deficit for 2013 dropped to $680 billion, from about $1.1 trillion the previous year,” the New York Times reports.

“In nominal terms, that is the smallest deficit since 2008, and signals the end of a five-year stretch beginning with the onset of the recession when the country’s fiscal gap came in at more than $1 trillion each year. As a share of the nation’s economy, the budget deficit fell to about 4.1 percent, from a high of more than 10 percent during the depths of the Great Recession.”

Key takeaway: “Growth in tax revenue from an improving economy accounted for much of the decline in the deficit. But increases in taxes and cuts in federal spending played a significant role, as did a surprising — and surprisingly long — slowdown in the pace of health spending.”

Thomas Piketty’s forthcoming book, Capital in the Twenty-First Century, shows that on a net basis the U.S. does not have any public debt and perhaps never did.

Matthew Yglesias: “The conventional way for debt scaremongers to measure the national debt is to compare gross public debt to GDP. But the normal way you measure the debt load of a business or a household is to ask for a net figure.”

“It’s simply not the case that a large amount of gross debt is a sign of overextension. It’s typically a sign of prosperity and creditworthiness.”

“Camp really is pretty bold in taking on some special interests and sacred cows.”

“He limits the mortgage interest tax deduction in a distributionally progressive way. He also tackles the state and local tax exemption in a way that’s part trolling of blue-state politicians, but also a genuinely sound reform. He has a version of a bank tax. He curbs the ‘carried interest’ loophole. There’s good stuff in here. Too much good stuff for the GOP leadership.”

“From the standpoint of actual legislating, this is actually the good option.”

Conceding that the likelihood of major tax reform passing is exceptionally low, Yglesias observes: “were tax reform to happen it would happen precisely because of collaboration across the aisle between some entrepreneurial legislators.”

Zachary Goldfarb: “The simpler tax scheme aims to boost economic growth and reduce the burden of filing taxes on most Americans.” The Republican’s draft tax reform proposal is certain to cause friction with the party’s traditional base of support, Wall Street.

Bloomberg provides highlights of the proposal, which would “require big banks to pay a new levy on assets and remove preferential treatment for private-equity managers’ carried interest.”

Camp is “seeking to simplify the tax system while generating the same amount of revenue for the government – – and without giving high-income individuals a tax cut. He’s scheduled to release the plan at 1:30 p.m. today in Washington.”

Politico: “As Camp’s Ways and Means Committee sought to slash tax rates, it’s easy to see how banks with more than $500 billion in assets — mammoth institutions like Goldman Sachs and Citigroup — became an easy target.”

“Even if this efforts falls by the wayside, a new tax on big financial institutions will be a permanent fixture when the government is looking for fresh sources of revenue.”

“The proposal … takes into account the fiscal reality of government austerity and the political reality of a president who pledged to end two costly and exhausting land wars.”

“Officials said that despite budget reductions, the military would have the money to remain the most capable in the world and that Mr. Hagel’s proposals have the endorsement of the Joint Chiefs of Staff.”

“The new American way of war will be underscored in Mr. Hagel’s budget, which protects money for Special Operations forces and cyberwarfare.”

Under Mr. Hagel’s proposals, the entire fleet of Air Force A-10 attack aircraft would be eliminated” and retiring the U-2 spy plane in “favor of the remotely piloted Global Hawk.”

The White House says President Obama’s upcoming budget proposal “will not include his past offer to accept lowered cost-of-living increases in Social Security and other benefit programs. Those had been a central component of his long-term debt-reduction strategy,” the AP reports.

Officials said that “those potential reductions in spending, included in last year’s Obama budget, had been designed to initiate negotiations with Republicans over how to reduce future deficits and the nation’s debt. But Republicans never accepted Obama’s calls for higher tax revenue to go along with the cuts.”

Bloomberg: “The so-called chained-CPI formula was part of a bid by the president to engage in deficit-reduction negotiations with Republicans. It wasn’t adopted after a standoff over taxes and spending. It also was criticized by many congressional Democrats and some of Obama’s political allies.”

AP: “Colorado’s legal marijuana market is far exceeding tax expectations, according to a budget proposal released Wednesday by Gov. John Hickenlooper that gives the first official estimate of how much the state expects to make from pot taxes.”

“The governor predicted sales and excise taxes next fiscal year would produce some $98 million, well above a $70 million annual estimate given to voters when they approved the pot taxes last year. The governor also includes taxes from medical pot, which are subject only to the statewide 2.9 percent sales tax.” 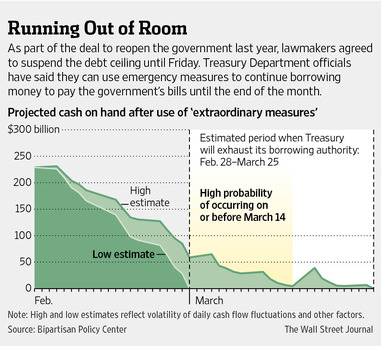 Wall Street Journal: “The U.S. Treasury Department took a first step Tuesday to avoid breaching the government’s debt ceiling once the suspension of the borrowing limit is lifted Friday. The Treasury said it would suspend sales of state and local government series securities as of Friday. The move doesn’t increase headroom under the ceiling, but it stops the Treasury from amassing new public debt.”

Meanwhile, Roll Call reports Speaker John Boehner admitted he doesn’t have a plan that can get enough Republican votes in the House.

International Tax Blog: “Today the Treasury Department published the names of individuals who renounced their U.S. citizenship or terminated their long-term U.S. residency (“expatriated”) during the fourth quarter of 2013. The number of published expatriates for the quarter was 630, bringing the total number of published expatriates in 2013 to 2,999.  The total for the year shatters the previous record high of 1,781 set in 2011 and is a 221% increase over the 2012 total of 932.”

New York Times: “House and Senate negotiators agreed on Monday on a new five-year farm bill that will eliminate or consolidate dozens of agriculture subsidy programs, expand government-subsidized crop insurance and cut about $9 billion from the food stamp program over the next decade.”

“At least for now, it brings an end to the partisan fighting that stalled two previous attempts to pass the legislation. The bill would reduce spending by about $23 billion over the next 10 years.”

“Many Senate Democrats are likely to be unhappy with the food stamps measure, which cuts roughly twice as much as senators approved in May.

“The farm bill would avoid some of the drastic measures that were part of the House bill, like work requirements and drug testing for food stamp recipients.”

House members have less than 48 hours to sift through the 959-page bill before voting.

National Journal: “That quickened pace breaks—at least in spirit—a House Republican transparency pledge from 2011, promising constituents that they would not vote on any legislation for at least three days after it has been released for public consumption.”

As a signal that he can bypass Congress to take action on his agenda, President Obama plans to use his executive power to raise the minimum wage to $10.10 per hour for government contract workers.

New York Times: “After a year in which most of his legislative priorities went nowhere, Mr. Obama is seeking ways to make progress without cooperation on Capitol Hill.”

“With prospects for congressional action still slim, Mr. Obama is using the executive order covering federal contractors to go as far as he can go on his own.”

“But the minimum wage order will also illustrate the limits of that approach … Mr. Obama’s order at most is likely to affect several hundred thousand workers.”

“The new rule will apply only to new federal contracts or in cases where contracts are renegotiated with new conditions.” 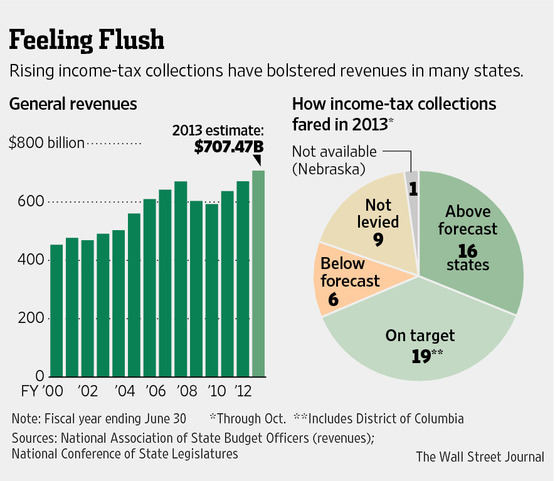 Wall Street Journal: “Governors across the U.S. are proposing tax cuts, increases in school spending and college-tuition freezes as growing revenue and mounting surpluses have states putting the recession behind them.”