“This is not how charts work! Since 935,573 is a larger number than 327,653, the pink line should be above the red line. Here’s what you get if you chart the numbers accurately:”

“The chart is misleading in another way, too. It’s true that Planned Parenthood performed 290,000 abortions and 2 million cancer-related services in 2006. But the organization also provided more than 3 million treatments for sexually transmitted diseases and nearly 4 million contraceptive services that year. By 2013, the number of STD treatments had gone up to 4.5 million, while the number of contraceptive services declined modestly to 3.6 million.”

“The poll found that the women’s health organization is viewed favorably by 47% of Americans and unfavorably by 31% in the Sept. 20-24 survey. That is about the same — even a tad better — than the 45%-30% split found in a Journal/NBC poll in July.”

“At a time when Republicans have been calling for cutting off federal funding to Planned Parenthood and threatening to shut down the government to do so, the new poll found that a strong majority of Americans — 61% — oppose eliminating funding, while 35% support a funding cut off.”

Vox: “Donald Trump’s campaign claims that his tax cut plan would offer “tax relief for middle-class Americans.” That’s not wrong, exactly — but a new analysis from the left-leaning tax analysis shop Citizens for Tax Justice suggests that the group of Americans getting the most relief would be the top 1 percent:”

“Trump’s campaign also claimed that the tax plan would cost nothing. CTJ’s analysis suggests that’s false, concluding that the plan would cost a whopping $10.8 trillion in its first decade.”

Politico: “Nearly seven in 10 Americans — 69 percent — oppose shutting down the government over funding for Planned Parenthood, according to the results of a new national Quinnipiac University poll released Monday.”

“Just 23 percent support closing the government over the dispute. Even among Republicans, a majority of 56 percent to 36 percent opposes a shutdown due to Planned Parenthood.”

“At the same time, 44 percent to 39 percent said they had a favorable opinion of Planned Parenthood, with a significant gender gap. Among women, 50 percent to 35 percent approve of the group, while men disapprove, 43 percent to 38 percent.”

Paul Krugman: “Bad as Mr. Boehner was, he was just a symptom of the underlying malady, the madness that has consumed his party.”

“The Boehner era has been one of budget blackmail, in which threats that Republicans will shut down the government or push it into default unless they get their way have become standard operating procedure.”

In the words of political analysts Thomas Mann and Norman Ornstein, “the G.O.P. has become an ‘insurgent outlier’ that is ‘ideologically extreme’ and ‘unmoved by conventional understanding of facts, evidence and science.’ And Mr. Boehner did nothing to fight these tendencies. On the contrary, he catered to and fed the extremism.”

“Mr. Boehner is quitting because he found himself caught between the limits of the politically possible and a base that lives in its own reality. But don’t cry for (or with) Mr. Boehner; cry for America, which must find a way to live with a G.O.P. gone mad.”

Christopher Ingraham: “Once again, our leaders in Washington are on the brink of shutting the government down over fierce disagreements.”

“This year the sticking point is over whether or not to continue providing federal funding to Planned Parenthood … The group receives about $528 million dollars in public funds each year, according to its own records and IRS statements. By statute, these funds can’t be used to provide abortions. Instead, they’re directed to all the other services which comprise the majority — 97 percent — of Planned Parenthood’s activities: STD testing, contraception, cancer screening, and other women’s health services.”

“In the context of all federal spending, [$528 million] is infinitesimally small. In fiscal year 2014, the federal government spent $3.5 trillion, according to the Congressional Budget Office. So Planned Parenthood spending makes up roughly 1/50th of 1 percent of all federal expenditures — and that’s rounding up generously.”

The Hill: “Cutting off Planned Parenthood’s funding would result in a net savings of $235 million over a decade, while also resulting in ‘several thousand’ unplanned births that would drive up government costs elsewhere, the Congressional Budget Office said Wednesday.”

“A bill to freeze the provider’s funding would save $390 million in Medicaid spending over the next year, according to a report from the nonpartisan office. But it would also cost Medicaid about $60 million more because of the additional pregnancies by women who no longer receive birth control.”

“CBO warned that 15 percent of patients would lose access to care. The people most likely to be affected are those living in areas without other healthcare clinics that cater to low-income populations — most of Planned Parenthood’s current clientele.”

“More women are likely to become pregnant without access to Planned Parenthood’s family planning services. Because 45 percent of all births are paid for by Medicaid, the program’s costs would rise.”

Matthew Yglesias: “Jeb Bush’s tax plan would cut individual income taxes for almost all Americans, but would not do so equally. In fact, according to a new analysis from Citizens for Tax Justice, more than half the dollar value of the tax cuts would go to 1 percent of the population — the richest 1 percent:”

“In Bush’s case, that regressive structure is exacerbated because he also cuts taxes on investment income, which overwhelmingly flows into the pockets of the highest-income households.”

Washington Post: “The U.S. economy is entering an uncertain and perilous autumn, facing risks from abroad and from policymakers in Washington in what promises to be another tumultuous chapter in the nation’s slow-going recovery.”

“The irony is that 2015 is expected to mark the first time in four years year that the federal government is actually boosting economic growth, rather than detracting from it, according to an analysis by Macroeconomic Advisers. But if a budget deal is not struck and the spending cuts outlined in a compromise report laid out this summer are enacted, the country could be headed back into recession, the report found.”

“Already, the economy has been growing, albeit slower, for a longer period than the post-World War II average. The unemployment rate, which peaked at about 10 percent just after the recession, is now about half that, and many analysts believe it is nearing its lowest sustainable level.”

“More important will likely be the volatility a poisonous political climate could inject into already skittish financial markets. Worse, the mounting rancor in Washington could carry over into difficult debates later in the year. Beyond approving a stop gap measure to avert a government shut down now, lawmakers must negotiate a long-term budget deal, fund federal highway and transit projects and lift the national borrowing limit to avoid what would be a catastrophic default.”

Wall Street Journal: Sen. Bernie Sanders “backs at least $18 trillion in new spending over a decade, according to a tally by The Wall Street Journal … Mr. Sanders sees the money as going to essential government services at a time of increasing strain on the middle class.”

“His agenda includes an estimated $15 trillion for a government-run health-care program that covers every American, plus large sums to rebuild roads and bridges, expand Social Security and make tuition free at public colleges.”

“To pay for it, Mr. Sanders … has so far detailed tax increases that could bring in as much as $6.5 trillion over 10 years, according to his staff.”

“The Sanders program amounts to increasing total federal spending by about one-third—to a projected $68 trillion or so over 10 years.”

“For many years, government spending has equaled about 20% of gross domestic product annually; his proposals would increase that to about 30% in their first year. As a share of the economy, that would represent a bigger increase in government spending than the New Deal or Great Society and is surpassed in modern history only by the World War II military buildup.”

The Hill: “A huge majority wants Congress to keep the government open, regardless of whether that means providing funding to Planned Parenthood, according to a CNN/ORC poll released Monday.”

Wall Street Journal: “How can Mr. Trump lead the Republican presidential field while calling for higher taxes? A look at poll data suggests that a constituency exists for raising taxes on the wealthy—even within the Republican Party.”

“A plurality of Republicans–some 42%—say they’d think less favorably of a candidate who supports raising taxes on the wealthy, Wall Street Journal/NBC News polling found in March. But nearly 3 in 10 said that proposing such a tax increase would make them feel more favorable toward a candidate.”

“Among lower-income Republicans, a small plurality actually says they would feel more favorable toward a candidate who supports raising taxes on the wealthy. That support fades at higher incomes levels.” 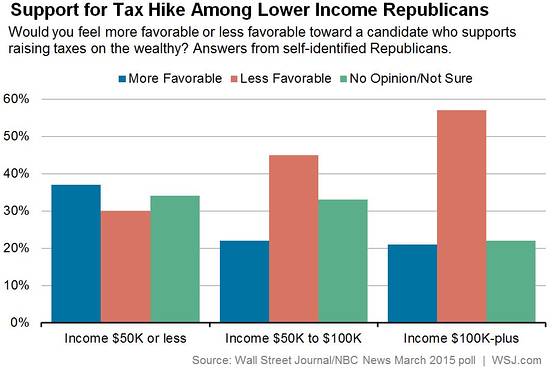 “The above offers a glimpse of the populist wave that Mr. Trump is riding in the polls. A substantial part of the party, particularly in rural America, is on the lower end of the income spectrum. Some 37% of the party is made up of people from households earning $50,000 or less, the WSJ/NBC News survey found.”

The Hill: “Sen. Elizabeth Warren (D-Mass.) said Tuesday that she agrees with GOP presidential front-runner Donald Trump when it comes to raising taxes on wealthy Americans.”

“‘Donald Trump and I both agree that there ought to be more taxation of the billionaires, the people who are making their money on Wall Street,’ she said.”

Max Ehrenfreund: “Taxes, for the most part, are what unite the Republican candidates despite their differences and separate them from the Democrats, who are talking about raising them … It is only on taxes that Trump is genuinely crossing party lines.”

“Indeed, on taxes, Trump has more in common with his Democratic opponents than with the Republicans.”

“That doesn’t mean … another Democrat could win over Trump’s legions of supporters … They like Trump because they think that immigration — his main talking point — is making it harder for them to find work, not because of his views on the the uppermost marginal rates (which they don’t pay anyway) or the payroll tax limit for Social Security (which doesn’t apply to them).”