Said Oliver: “Americans basically spent more on the lottery than they did on America.”

Cristopher Ingraham writes that Americans have no idea how the government spends its money.

A Pew Research Center poll asked respondents “which program the government spent the most money on: Social Security, transportation, foreign aid, or interest on the national debt. Here’s how they responded:” Neil Irwin explains how surprisingly simple it is to claim tax deductions for personal expenditures as a business expense. And it’s legal.

Using the Michael Sorrentino tax fraud case as an example, Irwin notes that the case highlights “a basic fairness problem in the tax code. Mr. Sorrentino did plenty of things to avoid taxes that were perfectly legal, showing how those with the resources to hire accountants and lawyers can end up with lower tax bills than people with a regular job.”

“In other words, if you stay away from the really egregious deductions, like trying to deduct the expense for your daughter’s wedding as a business entertainment expense just because a couple of colleagues were invited, you’re probably going to be just fine.”

“Compare that with a guy who earns a regular paycheck at a standard job. All of his income is reported to the I.R.S. on a W-2 at the end of the year. He probably won’t have any way to deduct dinner with friends, or tickets to a game, from his income taxes. And he probably won’t be able to pay accountants to help him brainstorm plausible deductions and to help keep him just on the right side of ‘legal.’”

A new Baylor University study finds that people living in countries with governments that spend more on social services report being more contented.

Four measures of government policies were used by the researchers.

The study’s findings held true regardless of whether respondents were rich or poor. The researchers also ruled out alternative explanations such as an individual’s health, education level, and marital status as well as the gross national product and unemployment rate of the country that he or she lives in.

Countries ranked from most to least satisfied — with 10 the highest level of satisfaction:

New York Times: “The weight of the federal income tax has varied widely since it was introduced a century ago. It has generally played a progressive role in mitigating income inequality. But it is not powerful enough to overcome the widening gap of recent decades.”

John Tierney highlights one of the “most interesting maps” from Wallet Hub:

“The Wallet Hub analysts essentially asked how much each state receives back as a return on its federal income-tax investment.  They compared the 50 states and the District of Columbia on three metrics: 1) federal spending per capita compared with every dollar paid in federal income taxes; 2) the percentage of a state’s annual revenue that comes from federal funding; and 3) the number of federal employees per capita.  The third measure received only half the weight of each of the others in the calculation.”

Mississippi and New Mexico top the list of “most dependent” states.

“It’s not just that some states are getting way more in return for their federal tax dollars, but the disproportionate amount of federal aid that some states receive allows them to keep their own taxes artificially low. That’s the argument Wallet Hub analysts make in their 2014 Report on Best & Worst States to be a Taxpayer.”

Floyd Norris: “It is an interesting fact that our current tax system assures that — year after year — the superrich, those who report adjusted gross incomes of more than $10 million, have tax rates that are significantly lower than those of the very rich, those earning more than $500,000 but less than $10 million.”

“Figures just released by the Internal Revenue Service show that in 2011 the difference in rates between the groups rose to 4.1 percentage points, the largest since the I.R.S. began calculating the data in 2000. The superrich paid 20.4 percent of their income in federal income taxes in 2011, while the very rich paid 24.5 percent.”

“Why are the superrich treated so well? It is largely because investment income — what we used to call unearned income — has long enjoyed preferential tax treatment.”

“But starting in 2013, the wealthy face significant tax increases. And the increases are greater for investment income. It seems likely that the gap in tax rates between the superrich and the very rich may be narrowed.” 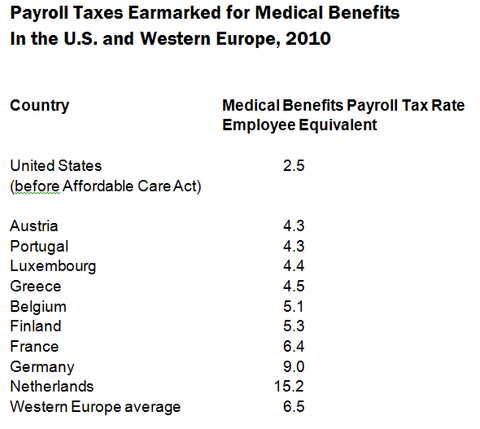 “The contrast between the United States before the passage of the Affordable Care Act and Western Europe is consistent with the common sense idea that universal health coverage has a cost in the form of taxation of labor market activity. This is not to say that one system is better than the other. The point is that benefits appear to come with costs: more coverage requires higher tax rates.”

“Yet the conventional wisdom is that the United States is now expanding coverage with hardly any new taxes on middle-class workers.”

Mulligan  asserts that “the health overhaul contains a variety of hidden taxes — provisions that politicians and journalists do not call taxes, but nonetheless are the economic equivalent of taxes — that in combination have a lot in common with the payroll taxes that Europeans use to pay for their public medical programs.”

“For the most part, the new hidden taxes are economically equivalent to either employment taxes or income taxes.”

Derek Thompson: “The Times drew a magnificent graph of who benefits from the $1 trillion in tax breaks hidden within our law. The upshot is that, just as the rich pay the most taxes, they benefit the most from tax breaks. Refundable credits, which offer lower income families the opportunity to earn money from the federal income tax law, include child credits, college credits, and the earned income tax credit. The majority of capital gains benefits accrue not to the 1%, but to the 0.1%. That’s one reason why our largely progressive tax code actually becomes slightly regressive at the very top, as more and more money comes from via tax-preferred investments.”

Bloomberg: “The U.S. government’s deficit will fall to $492 billion this year, according to the Congressional Budget Office, a steeper drop than originally predicted from $680 billion in fiscal year 2013.”

“President Barack Obama has often pointed to the declining deficit in making the case for his economic program, including greater spending on infrastructure and other items. Republicans have called for deeper cuts to balance the budget.”

But: “Deficits will rise sharply after next year, CBO said. Cuts to discretionary spending on programs such as military defense and national parks will be more than offset by a rise in health care and Social Security costs, as the baby boomer generation ages into retirement, as well as higher interest payments on the national debt.”

“News reports about higher tax rates for some taxpayers may have influenced Americans’ perceptions of middle-income taxes, or perhaps the ongoing debate between Obama and Republicans about efforts to reduce income equality are having an effect. Also, many Americans consider themselves middle class, even if they fall on the higher end of the income distribution, and this could help explain the spike.” Andrew Ross Sorkin provides a rundown of the tax perks available to corporations that “have famously excelled at this game.”

“How well? Companies paid an average effective federal tax rate of 12.6 percent in 2010, the last time the Government Accountability Office measured the rate.”

Some of the most “egregious corporate tax loopholes” include:

Carried interest benefit. “Despite repeated efforts to repeal it, the loophole has remained, in part because of well-financed industry lobbying in Washington. But much of the lobbying isn’t coming from the private equity industry — it’s coming from another beneficiary that often goes overlooked: the real estate industry.”

Deducting legal expenses. “Amazingly, a company is allowed to claim those costs as a business expense.”

Corporate jets. “Companies that own aircraft can depreciate their planes more quickly than airlines — over five years instead of seven — and claim the deduction.”

Executive stock options. “Inexplicably, many of Silicon Valley’s newest star companies will be able to shelter a large portion of their profits as a result … The effect is enormous and has significantly changed the bottom line — and tax rates — at some of the largest companies.” Amazon’s combined tax rate, for example, was 9.4% for the period 2010 – 2012.

Sophie Novack and Sam Baker explain how some Obamacare provisions will raise the tax bill for some this year.

“The law’s biggest tax provision—billions of dollars in tax credits to help people cover the cost of their premiums—is already in effect, but doesn’t affect the taxes due on Tuesday. A handful of smaller provisions, mostly affecting wealthy households, will show up for the first time in this year’s filing.”

“Among this year’s changes: a 0.9 percent increase in Medicare taxes and a 3.8 percent surtax on investment income. Both are limited to high-income taxpayers, and both took effect for the first time in the tax season that just ended.”

“Most people won’t notice the extra Medicare tax because it was automatically deducted from their paychecks, but some could face a tax bill they did not expect.”

“This year’s changes are relatively technical and have a narrow reach,’ said Brian Haile, senior vice president for health policy at Jackson Hewitt. ‘Next year is a whole different kettle of fish.'”

Washington Post: “One of the great ironies of the rise of the tea party movement was that it coincided with the lowest total tax burdens seen in at least 30 years… Overall the trend is downward. The average filer saw her effective tax rate drop from 22 percent in 1979 to 18.1 percent in 2010. Rates on the bottom 20 percent of tax filers went from 7.5 percent to 1.5 percent, while the top 20 percent of earners saw a more modest decrease, from 27.1 to 24.0 percent over the same period.”