Paul Krugman comments on the “remarkable piece of reporting by Confessore, Cohen, and Yourish [that] documents the remarkable fact that campaign finance this election cycle is dominated by a tiny number of extremely wealthy people — more than half the total from just 158 families. This money is overwhelmingly flowing to Republicans.”

“Some analysts suggest that this is just because there’s more action on the Republican side, with the field still wide open. But I’m pretty sure that’s nothing like the whole story. The biggest piece of the super-rich-super-donor story is money from the financial sector. And there has, as the chart above shows, been a huge swing of finance capital away from Democrats to Republicans that began in the 2012 election cycle — that is, after the passage of financial reform. Basically, we’re looking at the people who brought you the financial crisis trying to buy the chance to do it all over again.”

Jonathan Rauch in The Atlantic observes that Americans are trending more toward inexperienced candidates for the presidency.

“The chart below shows the experience level of presidential winners and losers from 1960 to 2012. (For the purposes of this graph, experience equals years between first election to a governorship, a Senate seat, or the vice presidency and election to the presidency; the trend lines do not change much if House experience is included.)”

“Starting in 1996, the candidate with more experience begins consistently losing. Moreover, as the trend lines show, the inexperience premium has increased over time. That makes some sense: As voters have grown angrier with government, they have become more receptive to outsiders. Republicans, in general, are especially angry with government, so no one will be surprised to learn that since 1980 their presidential candidates have had, on average, three to four years’ less experience than the Democrats’ candidates.” 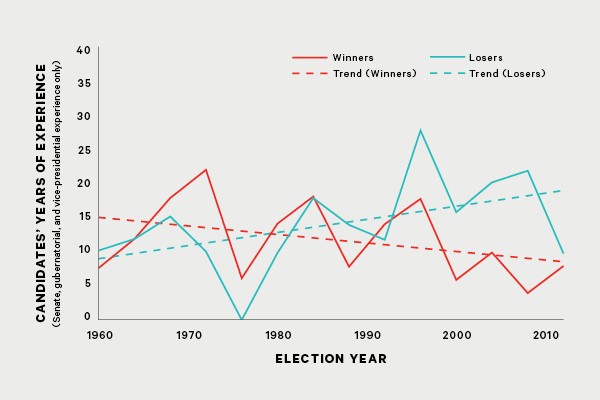 Gallup: “A special Gallup analysis of how Republicans and Republican-leaning independents feel about the leading Republican presidential candidates shows each has a unique fan base within the party.” “One important example is ideology. These results show that very conservative Republicans are more positive about many of the candidates, but that Chris Christie and Jeb Bush are clear exceptions to this tendency. This could have consequences in primary voting if highly conservative Republicans are those most likely to turn out and vote. Another example is provided by ethnic differences. Though Hispanic Republicans may not be a large part of the GOP primary voting population, the fact that Bush and Rubio do well, and Trump does poorly among this group could have consequences further down the line if one of these three were to gain the Republican nomination.”

Here is a ranking of jobs more desirable than speaker of the House.

6) Sisyphus: Same frustrating feeling that “at the end of the day, I’ve accomplished something — wait, no.”

3) Dentist: This job also requires you to do something that is like pulling teeth but in the end you actually have pulled a tooth out.

2) Whipping Boy: Not to be confused with the Majority Whip, this person also bore the punishment when somebody else (the king’s son) does something wrong — but at least he occasionally got an earldom out of it.

1) Daycare Provider: They cry, they throw tantrums, they scribble graffiti on the walls, they foil all your attempts at discipline, but your charges will eventually grow up.

Paul Krugman observes that “when it comes to energy policy, the G.O.P. has become fossilized. That is, it’s fossil fuels, and only fossil fuels, all the way.”

“Why has the right become so hostile to technologies that look more and more like the wave of the future?”

“Part of the answer is surely that promotion of renewable energy is linked in many people’s minds with attempts to limit climate change … Beyond that, you need to follow the money. We used to say that the G.O.P. was the party of Big Energy, but these days it would be more accurate to say that it’s the party of Old Energy. In the 2014 election cycle the oil and gas industry gave 87 percent of its political contributions to Republicans; for coal mining the figure was 96, that’s right, 96 percent. Meanwhile, alternative energy went 56 percent for Democrats.”

“And Old Energy is engaged in a systematic effort to blacken the image of renewable energy, one that closely resembles the way it has supported ‘experts’ willing to help create a cloud of doubt about climate science.”

Paul Krugman asks why every Republican candidate is obsessed with cutting taxes for the wealthy.

“True, you can find self-proclaimed economic experts claiming to find overall evidence that low tax rates spur economic growth, but such experts invariably turn out to be on the payroll of right-wing pressure groups …  Independent studies of the correlation between tax rates and economic growth, for example by the Congressional Research Service, consistently find no relationship at all.”

“Still, tax cuts are politically popular, right? Actually, no, at least when it comes to tax cuts for the wealthy. According to Gallup, only 13 percent of Americans believe that upper-income individuals pay too much in taxes, while 61 percent believe that they pay too little. Even among self-identified Republicans, those who say that the rich should pay more outnumber those who say they should pay less by two to one.”

“It’s straightforward and quite stark: Republicans support big tax cuts for the wealthy because that’s what wealthy donors want. No doubt most of those donors have managed to convince themselves that what’s good for them is good for America. But at root it’s about rich people supporting politicians who will make them richer. Everything else is just rationalization.”

Stephen Wolf in Daily Kos: “In PPP’s latest survey, this time in North Carolina, 72 percent said that a Muslim should never ever be allowed to be president, echoing Carson’s statements. An identical 72 percent also agree with a recent Donald Trump claim that President Obama is waging a war on Christianity. Finally, a 40 percent said the practice of Islam should be outright illegal, an even greater proportion that the 30 percent of Iowa Republicans who told PPP the same thing a week ago.”

“It’s ironic that the party loves to claim strict fealty to the Constitution is more than eager to ignore some of our founding document’s most fundamental protections—like the freedom of religion.”

Lawrence Downes in the New York Times: “Do these people know what it means to outlaw Muslim worship? Do they teach history in the North Carolina schools? Do they know what would happen if we closed mosques, arrested worshipers and prayer leaders, imposed religious tests for public office? Are these overwrought questions, or do the ugly answers in this poll portend something seriously wrong: an outbreak of a deadly fever this country has seen many times before?”

Chris Cillizza in the Washington Post: “A majority — 56 percent — of likely Democratic primary voters said that they ‘feel angry because our political system seems to only be working for the insiders with money and power, like those on Wall Street or in Washington, rather than it working to help everyday people get ahead.’ By contrast, just 37 percent of Republican primary voters express that same anger.”

Here’s a look at how the overall electorate feels on the question:

“What gives? My guess is that the populist strain runs more powerfully at the moment in the Democratic party than in the GOP. Democratic base voters — and that’s who says they are likely primary voters this far away from an election — see economic inequality as the issue of our times and are mad as hell that politicians in both parties aren’t doing enough about it.”

Gallup: “Most Americans appear to have little faith in most lawmakers to do the right thing. Majorities believe that most members of Congress are ‘out of touch with average Americans’ (79%), ‘focused on the needs of special interests’ rather than the needs of their constituents (69%) and corrupt (52%). Americans are less critical of their own representatives, but substantial percentages say their own member of Congress is out of touch (48%), focused on special interests (47%) and corrupt (32%).”

“Majorities of Americans view most members of Congress as corrupt, beholden to special interests and out of touch. This is not new and perhaps not even surprising, given the low esteem in which Americans hold the institution. But this cynicism is beginning to influence Americans’ views of their own federal representatives, not just the national legislature. Record or near-record numbers of U.S. adults say their local representative is out of touch and focused on serving special interests rather than their constituents.”

Philip Bump: “As John Boehner steps down from his position at the end of October, the man poised to replace him is Rep. Kevin McCarthy of California … By recent speaker standards, he’s practically a freshman.”

“The past 20 speakers have been in the House for an average of 8,492 days before being elected. Boehner had been in for 7,306. McCarthy will be at 3,223 — the least experience in the House since Georgia’s Charles Frederick Crisp in 1891.” Vox: “Donald Trump’s campaign claims that his tax cut plan would offer “tax relief for middle-class Americans.” That’s not wrong, exactly — but a new analysis from the left-leaning tax analysis shop Citizens for Tax Justice suggests that the group of Americans getting the most relief would be the top 1 percent:”

“Trump’s campaign also claimed that the tax plan would cost nothing. CTJ’s analysis suggests that’s false, concluding that the plan would cost a whopping $10.8 trillion in its first decade.” “The chart above plots average conservative ideology scores among House Republicans from the 1960s to today. The data come from political scientists Keith Poole and Howard Rosenthal, who’ve created a widely-used ideology index called a dw-nominate score, which is based on individual legislators’ voting records.”