Gallup: “More than six in 10 Republicans and independents who lean Republican say Donald Trump would be best at dealing with the economy/jobs and the federal budget deficit as president, compared with less than 20% who pick either Ted Cruz or Marco Rubio.” “Republicans choose Donald Trump, who promises to “make America great again” — as the best GOP candidate for handling the economy and federal budget deficit as president. These strengths appear to be at the core of his support, tying in with the persistent economic anxiety Republicans express on a host of Gallup measures, such as confidence in the economy and their own economic progress.”

“At the same time, Republicans — including many who favor his nomination — seem to be well aware that Trump has weaknesses. They implicitly acknowledge Trump’s unusual brashness, giving Rubio the most credit for having the right temperament to be president. Republicans also acknowledge that Trump is not the most conservative candidate, giving Cruz credit for the conservatism that has become his signature message. Given that Republicans in this poll favor Trump to win their party’s nomination, they appear to be willing to overlook the front-runner’s deficiencies.”

Gallup: “In November, and again in January and February, we asked Americans, just after they told us what they consider to be the most important problem facing the nation, whether they think any of the presidential candidates have come up with good ideas for solving that problem or not.”

“A little more than half of Americans — 52% — said yes in February. That’s up slightly from January and November. Forty percent say ‘no,’ and the rest say they don’t know.”

“These views vary quite a bit by partisanship, and this becomes a significant finding. Republicans are more positive than Democrats. To be specific, 65% of Republicans say a candidate has come up with good ideas for solving the most important problem facing the nation, compared with 45% of independents and 49% of Democrats.” “Bottom line: This lack of conviction among Democrats that candidates have answers, along with other indicators of lower enthusiasm about the election, could portend poorly for Democratic turnout next November, providing a distinct advantage for Republicans.”

Max Eherenfreund in The Washington Post: “In the South, it seems, old prejudices have persisted. Southern counties that had more slaves on the eve of the Civil War are distinct from their neighbors: White residents in those areas are more hostile toward African Americans and they are more likely to vote Republican today, new research shows. Drawing on archival Census figures and recent polls, the study adds to an expanding body of evidence on the importance of racial anxiety to the predominantly white Republican coalition.”

“Recent research by economists Ilyana Kuziemko and Ebonya Washington suggests that white Southerners who defected from the Democratic party after the civil-rights movement were those with the most conservative views on race. Democrats who held moderate and conservative views on other issues and who lived in other parts of the country largely remained loyal.” Gallup: “Hillary Clinton has reclaimed her position as the best-liked presidential candidate among Democrats and independents who lean Democratic, a sign that her candidacy is recovering a key advantage she recently surrendered to rival Bernie Sanders. Clinton’s net favorable score stands at +55 for the week of Feb. 18-24, 2016, a 10-percentage-point increase from her low point recorded over Jan. 27-Feb.10. This latter time period overlapped with her landslide loss to Sanders in the New Hampshire primary. Sanders’ net favorable over the past week, by contrast, stands at +44, well below Clinton’s score and a steep fall from the +57 he boasted in late January/early February.” Market Watch: The distance between a wealthy neighbor and a poor one may be mere miles, but the chasm between the two worlds is often too vast to surmount, according to a report by an advocacy group.

“’There is a growing body of evidence that the more time an individual spends living in a distressed community — especially at childhood — the worse that individual’s lifetime chances of achieving economic stability or success,’ said the Economic Innovation Group.” 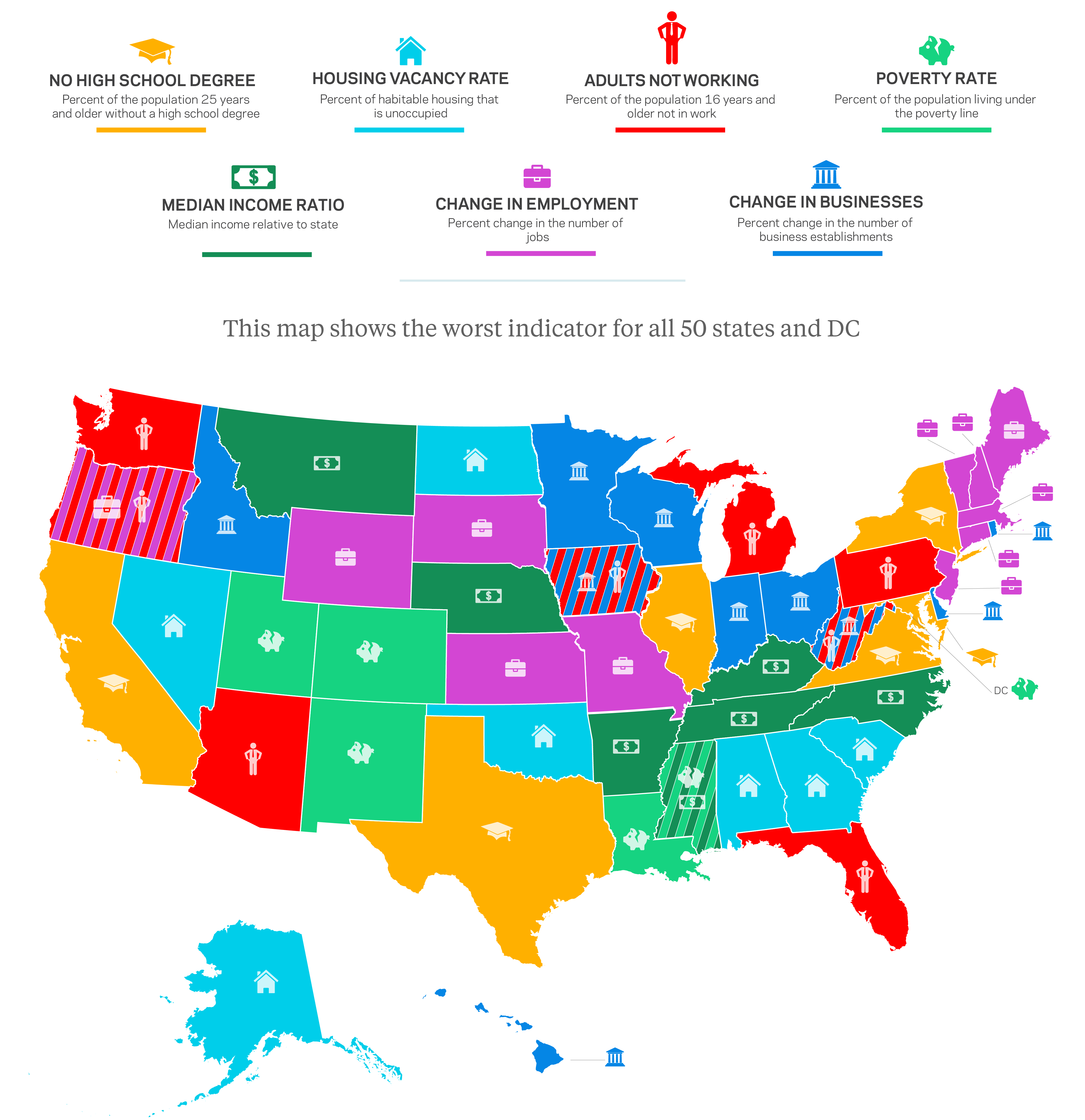 “The EIG on Thursday released its 2016 edition of the Distressed Communities Index, which shows that about 50.4 million Americans live in distressed neighborhoods today, up from 30 million in 2015.”

Philip Bump: “We’ve noted previously that Sanders’s party is more likely to refer to itself as liberal than it used to be, according to polling from Gallup. The Democrats still have more space under their umbrella for moderates, but they’re getting crowded out.”

“The Republicans, on the other hand, have been consistently and heavily conservative for some time.”

“That Democrats identify themselves as moving to the left across the board may help explain why Hillary Clinton is running further to the left than she did in 2008 — which helps explain why she’s been successful. (No data for Nevada in 2004 was available.)”

“The question is the extent to which this will be a long-term trend. Will the Democrats keep moving left, further polarizing the electorate? Or could a moderate candidate do well on other side and reshape who turns out?” “Two-thirds of Republicans (66%) – including 71% of conservative Republicans – say the Senate should not hold hearings on Scalia’s replacement until the next president selects a nominee. An even larger share of Democrats (79%) say the Senate should hold hearings and vote on whomever Obama nominates; among liberal Democrats, fully 85% express this view.” Gallup: “Hillary Clinton and Bernie Sanders have multifaceted images among the American public. But the most common responses Americans give when asked to say what comes to mind when they think of each are “dishonest” and “dislike her” for Clinton, and “socialist” and “old” for Sanders. On the positive side, a fair number of Americans view Clinton as capable and experienced, and Sanders as a fresh face and honest.” 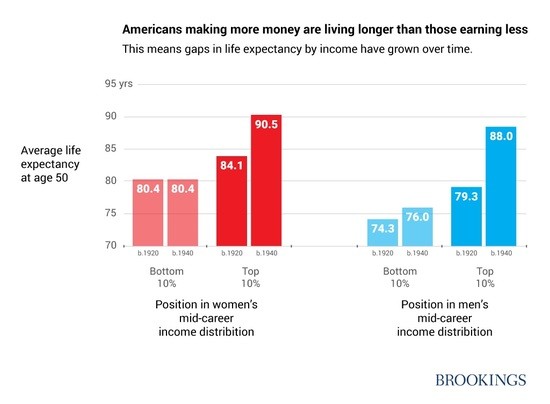 Theodore Johnson, writing in The Atlantic, argues that ‘The nation is witnessing the emergence of a post-Obama black electorate. It is a constituency that has grown impatient with elected officials’ generational promises that their programs will eventually pull blacks from the doldrums of society into a fairer America where opportunity is accessible and hard work is rewarded equally. To combat institutional lethargy, this wave of young people is employing a variety of tactics—from protest to pop culture—to influence the political agenda. They are the offspring of six decades of activism, growing voting power, and increased intra-racial class diversity.”

“Older blacks are more likely to rely on the vote to bring about policy change, whereas young voters place less confidence in electoral strategies. In the short-term, this may translate to an overall drop in black voter participation rates. But decreased voter turnout should not be mistaken for disinterest.”

“The post-Obama bloc employs a different strategy to bring about change—one rooted in creativity and energy. It is because of them that Black Lives Matter exists.”

Philip Bump: “With Jeb Bush now out of the race and Ben Carson out of the race in the eyes of literally every person paying attention to the presidential race, save Ben Carson (if he’s even paying attention), it’s worth wondering where their supporters might go. The thinking is that all those Bush supporters will go to a Rubio or Kasich, for example, but is that true?”

“It’s hard to say. The problem is that supporters of Bush and Carson are so few that polling on where they’ll go next is necessarily a tiny sample size. In a recent USA Today/Suffolk University poll, only 20 people said they planned to back Bush and only 13 signed up for Carson. That’s the problem, right? They have little support, so they have to drop out.”

“Here’s where those 33 people would go. This is not representative! But it reinforces that the idea that all of the vote will go to opponents of Trump is flawed.”

A “race that narrows to just Trump vs. Rubio or just Trump vs. Ted Cruz is a race that Trump probably loses. But that requires Kasich and Carson and Rubio or Cruz getting out. March 15 is the Ohio primary and the Florida primary, which both Kasich and Rubio will want to hang around for — making it even less likely that Trump will suddenly start trailing a consolidated centrist candidate.”