Washington Post: “During the housing bubble, Americans moved in droves to the exurbs, to newly paved subdivisions on what was once rural land. Far-out suburbs had some of the fastest population growth in the country in the early 2000s, fueled by cheap housing and easy mortgages.”

“New Census data, though, suggests that eight years after the housing crash, Americans are starting to move back there again … The exurbs are now again growing faster than more urban places, according to Brookings Institution demographer William Frey.” “That picture doesn’t mean that more Americans now live in exurbs than what Frey calls the “urban core,” nor that cities are even shrinking. It means, rather, that the most urban counties are now growing more slowly than counties containing the far-out suburbs.”

Pew Research: “In general, countries that have experienced higher economic growth since 2008 are more optimistic for the next generation than publics that have had less growth. For example, in China, which has experienced an average GDP growth of 9% between 2008 and 2013, 85% of the public says young people will be better off financially than their parents. Meanwhile, Italians, who have seen their economy contract by an average of 2% per year over the course of the global recession, are much less optimistic (15%).”

Washington Post: “Using job data from the U.S. Bureau of Labor Statistics, Pew analyzed the overall prevalence of certain professionals nationwide. They then compared the expected concentration relative to a state’s population to the actual concentration, to calculate the most unique job in each state, which are given on the map below.” Robert Samuelson in the Washington Post: “The Federal Reserve is considering when — and how much — to raise short-term interest rates.”

“For much of the recovery, wage gains have averaged about 2 percent annually, roughly paralleling inflation and therefore not much help in improving workers’ purchasing power. The fact that wages haven’t sped up is widely said to demonstrate that there’s still ample “slack” in the labor market, despite persistent declines in the unemployment rate (now 5.5 percent) and hefty monthly payroll job increases (295,000 in February).”

“There are good wage increases and bad. The good reflect better productivity; they permanently elevate incomes and living standards. The bad result in only temporary gains; they lead to higher price inflation that erodes the purchasing power of the earlier wage increases. In an ideal world, we would now get good wage increases that would bolster household finances and prolong the recovery.”

“The Fed needs to keep these distinctions in mind and to do the hard detective work of identifying any future wage gains as good or bad. If policymakers are unduly conditioned by memories of the 1960s and ’70s, they could misinterpret higher wages as automatically inflationary. That’s just one possibility. For now, price inflation is tame. The Fed should keep it that way without prematurely stifling the recovery. It’s no easy task.”

Gallup: “Americans continue to name the government (18%) as the most important U.S. problem, a distinction it has had for the past four months. Americans’ mentions of the economy as the top problem (11%) dropped this month, leaving it tied with jobs (10%) for second place.” Christopher Ingraham: “New American homes were bigger than ever last year, according to data from the U.S. Census Bureau. After a few years of shrinkage in the aftermath of the Great Recession, the median square footage of newly-built homes last year tipped the scales at over 2,400 square feet. That’s nearly 1,000 square feet larger than the median home built in 1982. The death of the McMansion has been greatly exaggerated.” “Young first-time buyers, who are less inclined to buy big suburban houses, are largely sitting out of the market. Credit requirements are still much tighter than they were before the housing collapse, so much of the activity in the housing market is from wealthier families looking to trade up.”

“Another, possibly overlooked contributor? Politics … A Pew Research Center study last year found that conservatives overwhelmingly prefer communities where ‘the houses are larger and farther apart, but schools, stores and restaurants are several miles away.'”

Nick Timiraos of the Wall Street Journal: “Home sizes are rising even as sales have slowed because builders have competed for affluent buyers who aren’t likely to run into trouble qualifying for a mortgage and saving for a down payment.” Washington Post: “Here’s definitive proof that San Francisco’s real estate market is insane. HSH.com, a mortgage research site, has estimated how much salary you need to earn to afford the principal, interest, taxes and insurance payments on a median-priced home in 27 metro areas.”

“On a national scale, a buyer who puts 20 percent down would need to earn a salary of $48,604 to afford the median-priced home in America. But that total varies a lot from city to city. Pittsburgh, Cleveland, St. Louis and Cincinnati rank as the most affordable metros in which to buy a new home.”

“New York, Los Angeles and San Diego are at the high end, requiring salaries of nearly $90,000 or more. But the most expensive city by far is San Francisco, where the site estimates you would need to make $142,448 to buy the median home in the area.”

Ana Swan of the Washington Post reports that despite big strides toward equal rights in the U.S., “significant gaps remain … In some ways gaps between blacks and whites have even widened over the past few decades, as data from Pew Research Center show.”

“Specifically, gaps in high school completion, life expectancy at birth and voter turnout have all narrowed, with blacks actually surpassing whites in the last category.”

“Most disturbingly, African-Americans are actually falling farther behind in some respects. The gaps between whites and blacks have widened for three important categories: median household income, the marriage rate and median household wealth.” Paul Krugman writes that “what we’re now looking at is an economy that in important respects resembles that of the 1990s.”

“Pointing out yet again just how wrong the usual suspects on the right have been about, well, everything isn’t the only reason to note parallels with the 1990s. There are also implications for monetary policy: Recent job gains have brought the Fed to a fork in the road very much like the situation it faced circa 1995. Now, as then, job growth has taken the official unemployment rate down to a level at which, according to conventional wisdom, the economy should be overheating and inflation should be rising. But now, as then, there is no sign of the predicted inflation in the actual data.”

“To me … the answer seems painfully obvious: Don’t yank away that punch bowl, don’t pull that rate-hike trigger, until you see the whites of inflation’s eyes. If it turns out that the Fed has waited a bit too long, inflation might overshoot 2 percent for a while, but that wouldn’t be a great tragedy. But if the Fed moves too soon, we might end up losing millions of jobs we could have had — and in the worst case, we might end up sliding into a Japanese-style deflationary trap.”

Climate Central: The solar sector is growing so quickly as solar panel costs drop that employment in the industry jumped 21.8 percent in 2014, adding 31,000 new jobs in that time for a total of 174,000 solar workers nationwide … Solar employment is expected to jump by another 36,000 workers this year. 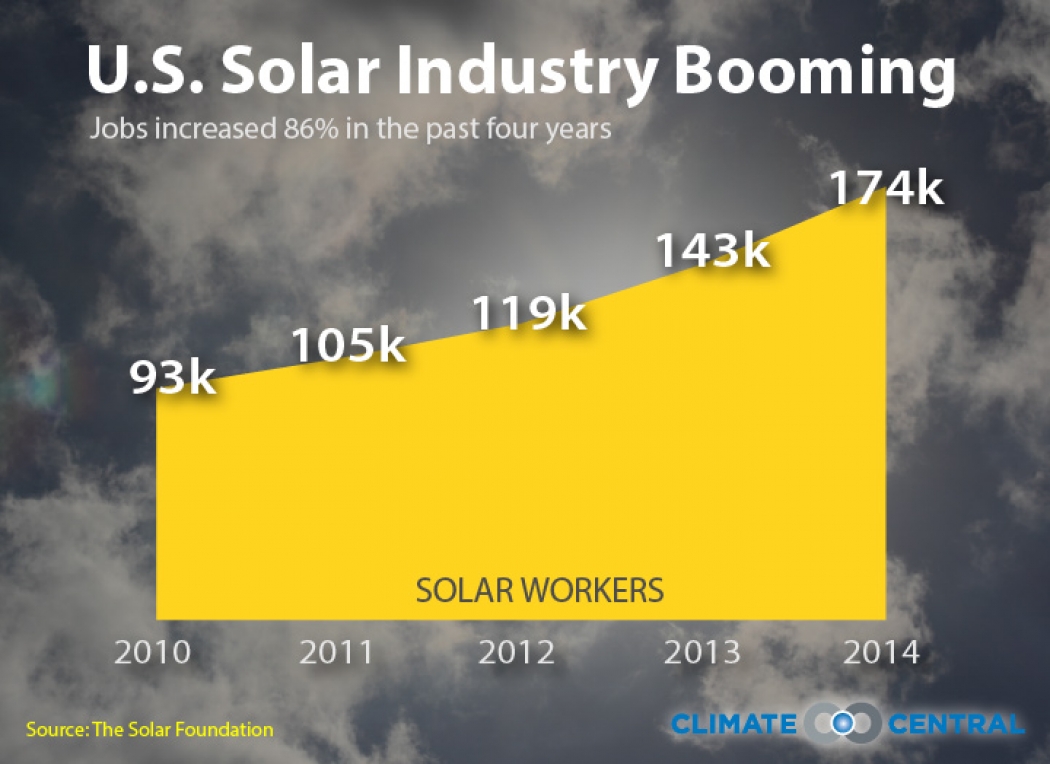 “The solar power industry employs a lot of workers despite solar power being only a tiny fraction — less than 1 percent — of total U.S. electric power generation … The industry’s growth is based mostly on the falling cost of photovoltaics … Since the late 1970s, solar panel costs have fallen 99 percent.”

“CBO projected that the government would spend $849 billion on the subsidies over the next 10 years, down from its January estimate of $1.1 trillion. Why? The big reason is that health insurance premiums are expected to increase at a much slower rate than had been anticipated.”

Margot Sanger-Katz: “The revisions reflect growing evidence that health care spending in the country — which has traditionally grown much more quickly than the overall economy — is entering a new, more moderate era. It is still rising, but not very much any more.” “That could eventually be not only a boon for consumers, but it could also have big implications for the federal budget: If the Congressional Budget Office is right, the amount the federal government pays for health insurance in the coming years will be hundreds of billions of dollars lower than it recently forecast, meaning a much smaller federal deficit.”

“The change, of course, means that the health reform law is now forecast to cost the government substantially less than originally expected. The net savings to the program could be about $142 billion over 10 years.”

Eduardo Porter: “Here is something every non-rich American family should know: The odds are that you will run out of money in retirement.”

“The Center for Retirement Research at Boston College estimates that more than half of all American households will not have enough retirement income to maintain the living standards they were accustomed to before retirement, even if the members of the household work until 65, two years longer than the average retirement age today.”

“The standard prescription is that Americans should put more money aside in investments. The recommendation, however, glosses over a critical driver of unpreparedness: Wall Street is bleeding savers dry.”

“If there is an industry rived with conflicts of interest, it is the financial conglomerates that advise Americans on investing these savings. Yet nobody was paying attention to the safeguards that might be needed when corporate retirement funds managed by sophisticated professionals were replaced by individual 401(k)s and Individual Retirement Accounts.”

“Imposing tighter standards on I.R.A.s will not end suspect advice … But the new rule could move American retirement saving one step closer to the goal: getting almost everybody to stop trying to beat the market, put their money in low-cost index funds and leave it there. Then Americans might reach retirement better prepared.”

Washington Post: “The fastest-growing big cities in the nation are concentrated in the South and West.”

“While shrinking cities were spread out across the country, many of them were concentrated around the Great Lakes.”