Al Jazeera: “Sea levels, greenhouse gases and both land and sea temperatures reached record highs in 2014, according to the National Oceanic and Atmospheric Administration’s annual ‘State of the Climate’ report published Thursday. The annual report — which refutes claims of a pause or slowdown in global warming — was published in partnership with the American Meteorological Society.”

“Record temperatures were observed near the Earth’s surface, according to the report, with four independent global datasets confirming that 2014 was the hottest year on record.” “Ocean surface temperatures were also the warmest in 135 years, and researchers observed the highest heat levels ever recorded in the deep sea, according to report.”

“Summing up much of the report, NOAA climate monitoring chief Deke Arndt, co-editor of ‘State of the Climate,’ said the seas last year ‘were just ridiculous.’”

The Hill: “Carbon dioxide emissions from America’s power plants are declining even as the economy is improving, a new report out Tuesday said.”

“Emissions fell by 12 percent from 2008 to 2013, according to a report from sustainability group Ceres. Carbon emissions are still significantly higher than they have been historically, but they are trending downward around the United States, and those reductions came even as the economy grew after the recession.”

“The findings are important because of the correlation between carbon emissions and the health of the economy: the two have traditionally grown together. But according to Ceres, power plan carbon emissions have been flat for about two years.”

“Though the report shows overall emissions are declining, Ceres said progress toward lower-emission energy is uneven geographically and across power producers, something that necessitates the Clean Power Plan.”

Paul Krugman: “There’s another major Obama initiative that is the subject of similar delusions: the promotion of green energy. Everyone on the right knows that the stimulus-linked efforts to promote solar and wind were a bust — Solyndra! Solyndra! Benghazi! — and in general they still seem to regard renewables as hippie-dippy stuff that will never go anywhere.”

“So it comes as something of a shock when you look at the actual data, and discover that solar and wind energy consumption has tripled under Obama.” 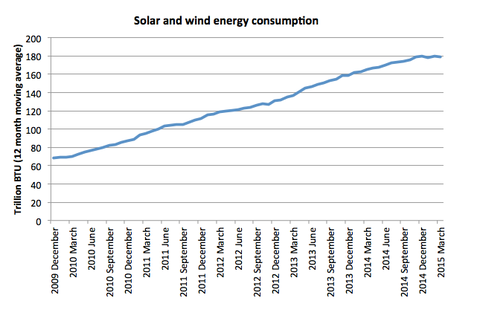 “Only a combination of rigid preconceptions and sheer ignorance can explain the way right-wingers still go around sniggering about Obama’s green-energy promotion. Far from being a bust, that policy was at least a contributing factor to an energy revolution.”

The Guardian: “ExxonMobil, the world’s biggest oil company, knew as early as 1981 of climate change – seven years before it became a public issue, according to a newly discovered email from one of the firm’s own scientists. Despite this the firm spent millions over the next 27 years to promote climate denial.”

“The email from Exxon’s in-house climate expert provides evidence the company was aware of the connection between fossil fuels and climate change, and the potential for carbon-cutting regulations that could hurt its bottom line, over a generation ago – factoring that knowledge into its decision about an enormous gas field in south-east Asia. The field, off the coast of Indonesia, would have been the single largest source of global warming pollution at the time.”

“However, Exxon’s public position was marked by continued refusal to acknowledge the dangers of climate change, even in response to appeals from the Rockefellers, its founding family, and its continued financial support for climate denial. Over the years, Exxon spent more than $30m on thinktanks and researchers that promoted climate denial, according to Greenpeace.”

The Hill: “House Republicans lambasted the Obama administration Wednesday for making climate change a high priority at the Department of Homeland Security (DHS).”

“The GOP argued at a hearing that the emphasis comes at the expense of other, more important, activities at DHS, and puts the country at greater risk from terrorists, including the Islamic State in Iraq and Syria (ISIS).”

“Obama’s recent focus on climate change in terms of national and international security has angered many Republicans. He declared in January that climate change is the greatest threat to future generations and that it threatens more people than terrorism.”

Brad Plumer: “If you only focused on the United States, you might think coal’s days are numbered … But that’s not true globally. Far from it. According to data from BP’s Statistical Review of Energy, coal consumption has actually been accelerating worldwide since the end of the 1990s:”

“According to an important new study in The Proceedings of the National Academy of Sciences, we’re in the midst of a global ‘renaissance of coal’ that’s not confined to just a few countries like China or India. Rather, coal is becoming the energy source of choice for a vast array of poorer and fast-growing countries around the world, particularly in Southeast Asia. ‘This renaissance of coal,’ the authors write, ‘has even accelerated in the last decade.'”

“Suffice to say, this has huge implications for global warming. Coal now supplies roughly 30 percent of the world’s primary energy use.”

Deseret News: “U.S. consumers are increasingly turning to solar, wind and biomass for their energy needs, driving domestic renewable energy consumption to its highest peak since the 1930s. A recent analysis by the U.S. Energy Information Administration — an independent research service of the U.S. Department of Energy — found that renewables’ share of the nation’s energy consumption hit 9.8 percent in 2014.”

L.A. Times: “State officials on Wednesday formally adopted new rules governing hydraulic fracturing in California, setting in motion some of the toughest guidelines in the nation for the controversial oil extraction practice. The oil and gas agency also released its environmental impact report that concluded fracking could have ‘significant and unavoidable impacts’ on a number of fronts, including air quality, greenhouse gas emissions and public safety.”

“The regulations, which lawmakers approved in 2013, require oil companies to expand monitoring and reporting of water use and water quality, conduct broad analysis of potential engineering and seismic impacts of their operations, and comprehensively disclose chemicals used during fracking and other operations.”

The accompanying environmental impact report concluded that “fracking could, in a worst-case scenario, ‘generate greenhouse gas emissions that may have a significant impact on the environment.’ The operations could also increase pollutants ‘to levels that violate an air quality standard or contribute substantially to an existing or projected air quality violation.'”

Inside Climate News: “The Energy Information Administration—the federal agency responsible for forecasting energy trends—has consistently and significantly underestimated the potential of renewable energy sources, misinforming Congress, government agencies and others that use the forecasts to analyze and develop policies, according to a report by a trade group of clean energy companies.”

“Wind generating capacity, for example, has increased on average by about 6.5 gigawatts each of the past 8 years, according to the report released Monday by Advanced Energy Economy, the trade association. But the EIA has projected that only 6.5 gigawatts would be added between 2017 and 2030.”

“The EPA relied on EIA estimates in developing national carbon regulations for power plants, known as the Clean Power Plan. The rules set state-level emission reduction targets, which the EPA partly calculated by estimating the potential for renewable energy generation. Because the EPA used the EIA’s assumptions, it underestimated renewables growth and set less ambitious targets than it could have done, according to Katofsky and researchers at the Union of Concerned Scientists and other environmental groups.”

“The trade group contends that the EIA has consistently overestimated—sometimes by more than 50 percent—the cost of power produced from renewables and capacity.”

The Guardian: “The US supreme court struck down new rules for America’s biggest air polluters on Monday, dealing a blow to the Obama administration’s efforts to set limits on the amount of mercury, arsenic and other toxins coal-fired power plants can spew into the air, lakes and rivers.”

“The 5-4 decision was a major setback to the Environmental Protection Agency (EPA), and could leave the agency more vulnerable to legal challenges from industry and Republican-led states to its new carbon pollution rules.”

Vox: “The mercury rule will stay into effect for the time being, but the EPA will need to reconsider it in the months ahead, taking costs more fully into account. In his opinion, Scalia remanded the decision back to the DC Circuit Court with this guidance: ‘EPA must consider cost — including cost of compliance — before deciding whether regulation is appropriate and necessary. It will be up to the Agency to decide (as always, within the limits of reasonable interpretation) how to account for cost.'”

“Now, we will have to see whether the DC Circuit Court simply orders the EPA to carry out additional analyses — or decides to strike down the rule altogether. Even if the rule does get struck down, however, the practical impact on mercury pollution may be relatively limited.”

National Journal: “Acting on climate change can avert tens of thousands of premature deaths and save billions on electricity and infrastructure costs by the end of the century, according to a report released by the White House today.”

“The White House is aggressively pushing the message that action on climate change can produce economic and public health benefits, doing so amid attacks from the right that the regulations are too costly and will produce minimal benefits. House Republicans this week will hold two votes on bills that would scale back or block emission rules on power plants.”

“According to the [EPA’s Climate Change Impacts and Risk Analysis,] scaling back the climate plan would have impacts across myriad sectors, from transportation to agriculture. For example, the report predicts that anywhere from 720 to 2,200 bridges would become structurally deficient as a result of extreme weather and storms by 2100.”

“The report also predicts that implementing President Obama’s climate action plan and reaching a global deal would avert 57,000 deaths from poor air quality and another 12,000 deaths from extreme temperatures by the end of the century.”

Washington Post: According to a new survey analysis by the Yale Project on Climate Change Communication, “there could be substantial receptivity to the pope’s message even among Catholics who are members of today’s GOP, well known for housing strong climate change skepticism.”

“Culling information from six national polls taken over the period from 2012 through 2015, the Yale and George Mason teams looked in particular at Catholic Republicans and how their climate views stood out within their own party.” Eco Watch: “This past May was the hottest on record, according to the National Oceanic and Atmospheric Administration (NOAA). ‘The combined average temperature over global land and ocean surfaces for May 2015 was the highest for May in the 136-year period of record, at 0.87°C (1.57°F) above the 20th century average of 14.8°C (58.6°F),’ said NOAA. This breaks the previous record, which was set last May.”

Pew Research: “On the eve of a forthcoming encyclical by Pope Francis on the environment and climate change, a new Pew Research Center survey finds that U.S. Catholics’ views on global warming are broadly reflective of American public opinion writ large; a solid majority believe that Earth is warming, but there is much more division over the cause and seriousness of climate change. Moreover, the poll shows that climate change is a highly politicized issue that sharply divides American Catholics, like the U.S. public as a whole, mainly along political party lines.”