New York Gov. Andrew Cuomo (D) announced that the state will not lift its ban on fracking, National Journal reports.

“The long-awaited decision marks a decisive turn in the years-long battle over fracking in New York State. Energy companies are eager to unlock potentially vast reserves of natural gas in rock underlying the state in the Marcellus Shale. But environmentalists have put strong pressure on the Democratic governor to keep fracking out of the state.”

“The Democratic governor’s decision followed the release of a highly-anticipated health and environmental study on the impacts of fracking. The study, conducted by the Cuomo administration, concluded that while data is limited and risks surrounding fracking are not fully known, the potential adverse impacts appear significant enough for the Health Department to recommend that fracking should not be allowed.”

Stephen Colbert had an amusing and informative segment on the impact of falling oil prices and its impact on foreign policy and the environment.

“For years, the fossil-fuel industries have been telling us that global warming is a hoax based on junk science,” Dana Millbank writes.

“But now these industries are floating an intriguing new argument: They’re admitting that human use of coal, oil and gas is causing carbon dioxide in the atmosphere to rise — but they’re saying this is a good thing. We need more CO2 in our lives, not less.”

“This was some creative thinking, and it took a page from the gun lobby, which argues that the way to curb firearm violence is for more people to be armed.”

A new report by Navigant Research projects that distributed generation will roughly double in the next nine years.

Think Progress: “Distributed generation (DG) is the decentralized production of electricity by small-scale systems — most often in the form of rooftop solar, but it can include biomass, wind, and other forms of renewable power as well. Navigant Research’s analysis also included natural gas and diesel generators of 6 megawatts or less, along with solar arrays of one megawatt or less and small wind turbines of 500 kilowatts or less.”

“According to their forecast (unfortunately behind a paywall) the total capacity for DG installed around the world will grow from 87.3 gigawatts in 2014 to 165.5 gigawatts in 2023. Most of the growth is anticipated to come from the deployment of solar. Geographically, the biggest increase in the projection was in Western Europe, with North America and the Asian Pacific not too far behind.”

“Greens who want President Barack Obama to kill the Keystone XL pipeline are adding a new weapon to their arsenal of protests and lawsuits — the world’s glut of cheap oil,” Politico reports.

“The same collapse in oil prices that is pumping dollars into motorists’ wallets also risks undermining the case for building the 1,179-mile pipeline in two crucial ways: It’s squeezing the western Canadian oil industry that has looked to Keystone as its most promising route to the Gulf Coast. And anti-pipeline activists hope that falling prices will make it politically safer for Obama to reject the project, despite the new Republican Congress’ pledges to put Keystone at the top of its 2015 energy agenda.”

“The oil price is crucial to the Keystone debate because the latest State Department environmental study on the project says prices in the $65-to-$75 range are a potential danger zone for oil production in western Canada — the point where transportation costs driven higher by failing to build the pipeline could ‘have a substantial impact on’ the industry’s growth. Cheaper oil also makes it easier to blame Keystone for the greenhouse gases that the Canadian oil fields send into the atmosphere.”

“How should reporters write about lawmakers and others who dispute the scientific consensus that climate change is largely driven by humans? A group of 48 scientists, science writers, and other experts—including popular educator Bill Nye—have some strong views on the subject. The group issued a statement last week taking the media to task for using the phrase ‘climate skeptic,’ saying that the word ‘denier’ is more accurate,” National Journal reports.

The statement from Nye and the others says the distinction between “skeptic” and “denier” is important in political debates.

“As scientific skeptics, we are well aware of political efforts to undermine climate science by those who deny reality but do not engage in scientific research or consider evidence that their deeply held opinions are wrong. The most appropriate word to describe the behavior of those individuals is ‘denial.’  Not all individuals who call themselves climate change skeptics are deniers. But virtually all deniers have falsely branded themselves as skeptics. By perpetrating this misnomer, journalists have granted undeserved credibility to those who reject science and scientific inquiry.”

Wall Street Journal: “The sudden plunge in global crude oil prices from over $100 a barrel to under $65 has been portrayed as a showdown between Saudi Arabia and the U.S., two of the world’s biggest oil producers. But the reality is more complex, involving Libyan rebels and Indonesian cabdrivers as well as Texas roughnecks and Middle Eastern oil ministers. It reflects both the surging supply of crude and the crumbling demand for oil.”

Vox: “Obama has long promised that US greenhouse-gas emissions will be (roughly) 17 percent lower in 2020 than they were back in 2005.”

“The short answer is that it’s going to be very difficult — though not impossible — for the US to meet its climate target for 2020. All the policies that the Obama administration has put forward so far, including the Environmental Protection Agency’s big plan to cut carbon emissions from power plants, aren’t yet sufficient. Obama will probably need new measures, like curtailing methane leaks from oil and gas drilling operations. And it’s still unclear how effective those future policies will be.”

“The Obama administration has also been putting forward other climate policies besides the EPA rule — like energy-efficiency regulations for new household appliances [and regulations to reduce hydrofluorocarbons]. These could nudge down US carbon-dioxide emissions from energy use a bit further.”

New York Times: “A study published Wednesday in the journal PLOS One estimated that 5.25 trillion pieces of plastic, large and small, weighing 269,000 tons, can be found throughout the world’s oceans, even in the most remote reaches.”

“The largest source of plastic by weight comes from discarded fishing nets and buoys, said Marcus Eriksen, the leader of the effort and co-founder of the 5 Gyres Institute, a nonprofit group that combines scientific research with antipollution activism.”

“Dr. Eriksen suggested that an international program that paid fishing vessels for reclaimed nets could help address that issue. But that would do nothing to solve the problem of bottles, toothbrushes, bags, toys and other debris that float across the seas and gather at ‘gyres’ where currents converge.”

“The survey teams were surprised to find far fewer samples of small plastic debris: “a one-hundredth as many particles as their models predicted.”

“The fact that the small plastics are disappearing is hardly good news. In fact, it could be far more troubling than the unsightly mess the plastics cause … Researchers are concerned that fish and other organisms that consume the plastics could reabsorb the toxins, and pass them along to other predators when they are eaten.”

Solar Energy Industries Association’s latest report shows that “the U.S. installed 1,354 MW of solar PV in Q3 2014, up 41% over Q3 2013, making it the second-largest quarter for solar installations in the history of the market.” “The growth has come primarily from two segments: residential and utility scale. Both segments are up substantially in 2014, and we anticipate continued strength through the next two years.”

CNBC reports that overall, “the amount of electricity generated by U.S. utility-scale solar photovoltaic power plants is up more than 100 percent in 2014 over the same period in 2013, thanks to big projects, many of them highly productive, that have been coming online.”

“With continued growth and adding in commercial and residential PV as well as concentrating solar power, solar electricity could easily account for 1 percent of U.S. generation by the end of this year.”

Washington Post: “President Obama spoke in dismissive terms of the Keystone XL pipeline Monday during an interview on “The Colbert Report Monday, saying its modest benefits need to be weighed against its contribution to climate change, ‘which could be disastrous.'”

During the interview, Obama “highlighted many of the pipeline’s disadvantages, and downplayed its benefits.”

Obama: “We’ve got to make sure that it’s not adding to the problem of carbon and climate change. We have to examine that, and we have to weigh that against the amount of jobs that it’s actually going to create, which aren’t a lot … Essentially, this is Canadian oil passing through the United States to be sold on the world market. It’s not going to push down gas prices here in the United States. It’s good for Canada.”

Clare Foran in the Atlantic writes about the trend to alter climate curriculum in schools.

“Truth in Texas Textbooks [coalition] formed last year to shape how climate change and scores of other topics are taught.”

“To shape climate curriculum, the coalition plans to rate textbooks as ‘good,’ ‘acceptable,’ ‘poor,’ or ‘worse.'”

“The coalition’s system of rating textbooks could soon spread beyond Texas. … Activists in California, Florida, Indiana, Maine, Nevada, Ohio, Utah, and Wisconsin have already contacted the coalition to learn how they can create their own rating system.”

“Eighty-nine new social-studies textbooks have now been approved in [Texas]. But school districts have a lot of leeway over exactly which books to buy, a series of decisions that they’re slated to make this spring.”

“The coalition sees that policy as an opportunity. It plans to send out a report to school districts detailing the grades assigned to each book. Volunteers are also gearing up to distribute their ratings among concerned-citizens groups and parent-teacher organizations.”

“Dan Quinn, a spokesman for the Texas Freedom Network, doubts the coalition will gain traction. He called their reviews ‘amateurish’ and ‘overtly political’ and believes ‘school administrators and teachers who make the purchasing decisions will see right through the nonsense.'”

Andrew Revkin in the New York Times: Stefan Rahmstorf of Potsdam University has written a fresh and detailed review of studies showing that (surprise~!) global warming is still under way despite the recent pause / plateau / hiatus / slowdown / standstill (choose one) in the planet’s mean temperature. 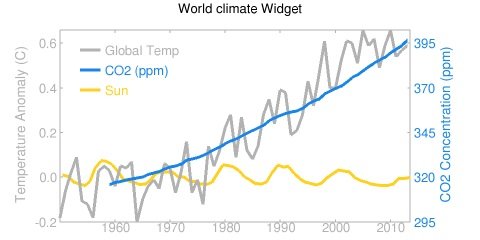 Revkin includes an excellent video clip that explains the difference between trend and variation.

Associated Press: “As the Obama administration makes headway at home in the fight against global warming, it has helped stoke record exports of fossil fuels that are contributing to rising levels of pollution elsewhere.”

“U.S. exports of diesel and gasoline have doubled since President Barack Obama took office, and the carbon embedded in them has [helped] meet political goals by taking it off America’s pollution balance sheet.”

“U.S. exports of gasoline and diesel more than made up for the savings at home in pollution abroad, according to an analysis by The Associated Press. Those exports released roughly 1 billion tons of carbon pollution into the atmosphere elsewhere during the same period.”

“There is no clear accounting of what America’s growth as a fossil-fuel powerhouse is doing to the global-warming picture. U.S. projects that increase energy exports could be considered, such as huge terminals planned for the West Coast to send more coal abroad for power plants. Trade agreements could factor in the implications of energy trade on global warming. But no trade pacts negotiated by the White House mention it.”