Mother Jones: “A new study in the journal Climatic Change has identified a [new]  phenomenon. Call it the ‘rich idiot’ effect: The study finds that among Republicans, as levels of income increase, so does their likelihood of ‘dismissing the dangers associated with climate change.’ But among Democrats and independents, there is little or no change in climate views as levels of income increase or decrease.”

The study, by Jeremiah Bohr of the University of Illinois at Urbana-Champaign, “looked specifically at those individuals who chose the ‘not very dangerous’ or ‘not dangerous at all’ options. And he found that at the lowest income level, the probability that a Republican would give one of these dismissive answers was only 17.7 percent. But at the highest income level, it was 51.2 percent. Here’s a visualization of the chief finding, showing how the likelihood of a Republican giving one of these answers changes in relation to wealth:”

“In November 2010, three combatants gathered in a sleek office here to build a carbon emissions policy that they hoped to sell to the Obama administration,” the New York Times reports.

“Over the next two years the lawyers, David Doniger and David Hawkins, and the scientist, Daniel Lashof, worked with a team of experts to write a 110-page proposal, widely viewed as innovative and audacious, that was aimed at slashing planet-warming carbon pollution from the nation’s coal-fired power plants. On June 2, President Obama proposed a new Environmental Protection Agency rule to curb power plant emissions that used as its blueprint the work of the three men and their team.”

“It was a remarkable victory for the Natural Resources Defense Council… The group’s leaders understand the art of influence: In successfully drafting a climate plan that heavily influenced the president’s proposal, the organization followed the strategy used by the American Petroleum Institute, the lobbying arm of the oil industry, to write an energy policy for Vice President Dick Cheney during the Bush administration.”

EcoWatch: “A large number of Republicans in the U.S. House of Representatives refuse to recognize even basic climate science. A new analysis by the Center for American Progress (CAP) shows that out of America’s 29 Republican governors, half of them side with the anti-science, climate denier caucus.”

“To highlight the discrepancy,  CAP Action War Room created an interactive map where users can track each governor’s record on climate and energy policy, including the Democratic governors, none of which, as CAP points out, have made public statements denying climate change.”

Think Progress: “The ‘world is already adding more renewable-energy capacity each year than fossil fuel capacity,’ Bloomberg New Energy Finance (BNEF) explained earlier this year. And BNEF’s just-released 2030 Market Outlook projects that disparity will skyrocket, concluding that ‘renewable energy may reap as much as two-thirds of the $7.7 trillion in investment forecast for building new power plants by 2030 as declining costs make it more competitive with fossil fuels.’”

“That means some $5 trillion in renewable investment over the next decade and a half. Of the 5 terawatts (5000 gigawatts) of generating capacity that will be added worldwide over the next 15 years, over 3 TW (3000 GW) are projected by BNEF to come from renewables. The capacity of plants powered by fossil fuels — coal, gas and oil — will account for under 1100 gigawatts.”

New renewable generation will outpace new fossil-fuel generation by over 7-to-1 in 2030.

Climate Central: “April fell first. It lasted through May. Now June will be the third month in a row with average carbon dioxide levels above 400 parts per million.”

“Atmospheric concentrations of the greenhouse gas, which helps drive global warming, haven’t been this high in somewhere between 800,000 and 15 million years.”

“It will be the first time in recorded history with this many weeks in a row of such high atmospheric concentrations of CO2.”

Graph from The New Republic

Richard Cohen: “It is a stunning thing, when you think about it: GOP conservatives adopting a position of studied ignorance [on climate change.]”

“Politics, not science, may firm up both sides of the debate. A Pew Research Center poll last November found that 67 percent of Americans think the planet is indisputably getting warmer … but among tea party types it’s 25 percent. Maybe more to the point, only 9 percent of tea party members think ‘human activity’ has contributed to global warming.”

“With climate change ranking low in urgency in a different Pew poll, there’s not much percentage in moderate Republicans standing up for science and common sense. Paulson et al. are to be commended for their effort, but they are — as Mike Bloomberg found out years ago — in the wrong party.”

“What possesses the tea party on climate change? Some of it has to do with traditional anti-establishment sentiment … Mostly, though, its position is rooted in a raging antipathy toward (hiss!) big government … tea party types would rather — almost literally — burn in a kind of hell than submit to Washington or, God forbid, the United Nations.”

Aaron Blake: “Even Democrats who prefer to develop alternate energy sources before expanding the use of fossil fuels say they want the Keystone XL pipeline built.”

“What the new poll shows is that even left-leaning voters who see themselves as environmentally conscious, pro-wind and pro-solar don’t believe that Keystone runs contrary to that ultimate goal.” “It appears, however, that a regional office has reached a new low: Management for Region 8 in Denver, Colo., wrote an email earlier this year to all staff in the area pleading with them to stop inappropriate bathroom behavior, including defecating in the hallway.”

“In the email, obtained by Government Executive, Deputy Regional Administrator Howard Cantor mentioned ‘several incidents’ in the building, including clogging the toilets with paper towels and ‘an individual placing feces in the hallway’ outside the restroom.”

Cantor “asked for any employees with knowledge of the poop bandit or bandits to notify their supervisor.”

“While the decision … largely upheld the EPA’s authority, it invalidated the agency’s decision to exempt small emitters and thus ‘tailor’ its greenhouse-gas regulations to allow greater flexibility.”

“In the context of the Affordable Care Act, of course, there have been heated controversies over the Obama administration’s efforts to delay implementation and to create other forms of flexibility.”

“It is too soon, of course, to know whether the court will count ‘transition relief’ under the Affordable Care Act as an illegitimate effort ‘to revise clear statutory terms that turn out not to work in practice,’ as a legitimate refusal to enforce legal requirements, or as something else altogether. But there’s no question that the court’s discussion will be invoked in Affordable Care Act litigation — and it is reasonable to wonder whether Scalia had that in mind as he wrote the EPA opinion.”

Reuters: “Annual property losses from hurricanes and other coastal storms of $35 billion; a decline in crop yields of 14 percent, costing corn and wheat farmers tens of billions of dollars; heat wave-driven demand for electricity costing utility customers up to $12 billion per year.”

“These are among the economic costs that climate change is expected to exact in the United States over the next 25 years, according to a bipartisan report released on Tuesday. And that’s just for starters: The price tag could soar to hundreds of billions by 2100.”

“Called ‘Risky Business,’ the report projects climate impacts at scales as small as individual counties. Its conclusions about crop losses and other consequences are based not on computer projections, which climate-change skeptics routinely attack, but on data from past heat waves.”

“The report does not make policy prescriptions, concluding only that ‘it is time for all American business leaders and investors to get in the game and rise to the challenge of addressing climate change.'”

Chart From Greenbiz  shows days per year when the heat and humidity could be so high that it will be unsafe for humans to remain outdoors (HHSI >92°F) Dark red is highest; dark green is lowest.

Ben Geman of The National Journal comments on the “boomlet of GOP former officials breaking publicly with Capitol Hill Republicans on climate change.”

“But among Capitol Hill Republicans, nobody is buying. Opposition to carbon regulations or carbon pricing is, if anything, more powerful than it was a few years ago …”

“It’s too early to say whether more GOP ex-officials will speak up, or whether they could have any sway on Capitol Hill. Lately, Republicans are indeed becoming more engaged on climate change, but not in the way that activists might hope. Instead, they’re launching fresh efforts to scuttle newly proposed EPA regulations, alleging that the rules would hurt the economy. It’s not the kind of opposition that Senate hearings or New York Times op-eds will undo anytime soon.”

“The case, Utility Air Regulatory Group v. E.P.A., preserves the government’s ability to confront global warming while also demonstrating Congress’s persistent failure to update the law to meet modern needs. In the absence of congressional action, the E.P.A. was left alone to deal with an impossible situation.”

“The point, as Justice Stephen Breyer argued in a partial dissent, was to adhere to the law’s clear purpose and to allow the agency the flexibility to make decisions based on new information.” 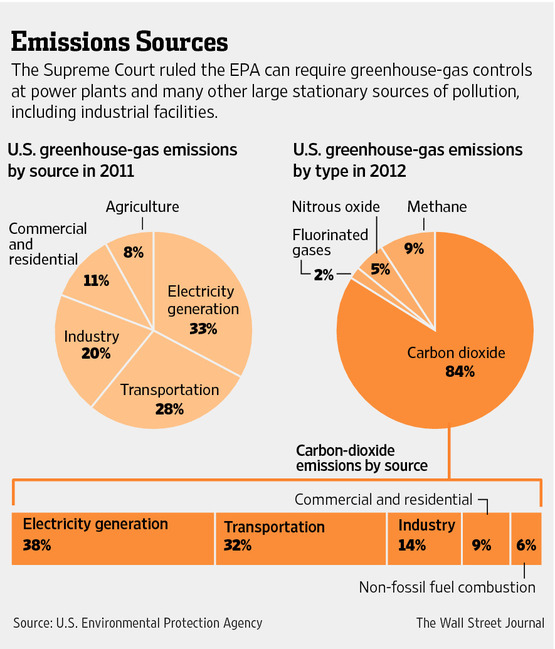 Washington Post: “The Supreme Court on Monday placed limits on the sole Obama administration program already in place to deal with power plant and factory emissions of gases blamed for global warming.”

“The justices said that the Environmental Protection Agency lacks authority in some cases to force companies to evaluate ways to reduce carbon dioxide emissions. This rule applies when a company needs a permit to expand facilities or build new ones that would increase overall pollution.”

“The decision does not affect EPA proposals for first-time national standards for new and existing power plants.”

“The outcome also preserves EPA’s authority over facilities that already emit pollutants that the agency regulates other than greenhouse gases. EPA called the decision ‘a win for our efforts to reduce carbon pollution because it allows EPA, states and other permitting authorities to continue to require carbon pollution limits in permits for the largest pollution sources.’”

“A carbon tax may be the best thing we could do, but we won’t actually do it.”

Krugman contends that Paulson’s comparison of the climate crisis with the 2008 financial crisis is not a good analogy.

“So let me suggest a different analogy, one that he probably won’t like. In policy terms, climate action — if it happens at all — will probably look like health reform. That is, it will be an awkward compromise dictated in part by the need to appease special interests, not the clean, simple solution you would have implemented if you could have started from scratch. It will be the subject of intense partisanship, relying overwhelmingly on support from just one party, and will be the subject of constant, hysterical attacks. And it will, if we’re lucky, nonetheless do the job.”