The Hill: “Massachusetts is preparing to abandon its troubled ObamaCare website, a system so problematic that the state was forced to enroll tens of thousands of people in temporary insurance plans through Medicaid.”

“Massachusetts officials are pursuing what they described as a “dual-track strategy” for their insurance marketplace, combining new, off-the-shelf enrollment software with a back-up plan to shift the system into HealthCare.gov if the transition takes too long.”
“Prior to Monday’s announcement, Massachusetts officials had considered rebuilding instead of replacing the website. They are now planning to use hCentive, a software product used to build insurance exchanges in Colorado and Kentucky.”

Jason Millman explains the federal-state difference in bronze enrollment: “Federal subsidies appear to have driven Americans to more expensive silver plans. HHS reported that 86 percent of people selecting plans in the federal exchanges qualified for federal assistance, compared to 82 percent of people in the state-run exchanges.”

“There was a pretty wide disparity in the percentage of people qualifying for federal subsidies in some state-run exchanges. In the District of Columbia, for example, just 16 percent of sign-ups qualified for premium subsidies. The subsidy eligibility rate was also relatively low in Colorado (60 percent), Hawaii (38 percent) and Vermont (59 percent).” Avalere: “A new analysis from Avalere Health finds that exchange enrollment meets or exceeds expectations in 22 states (44%), even after accounting for any attrition due to nonpayment of premiums. Assuming 15 percent of enrollees do not take the final enrollment step and pay their premiums, over 6.8 million people who enrolled through April 19 will have coverage effective as of May 1.”

Caroline Pearson, Vice President at Avalere: “Even after accounting for potential non-payment, enrollment exceeds 100 percent of projections in nearly half of states.” The Hill: “Pregnancy, birth and abortion among U.S. teenagers are at historic lows following a marked decline that began in the 1990s, according to a new study.”

“The Guttmacher Institute reported Monday that about 6 percent of teens became pregnant in 2010, the lowest rate in more than 30 years. Notably, the rate dropped 15 percent between 2008 and 2010 alone.”

“Study authors attributed the the decline to better access to birth control and better information about how to use it.”

“While the trends generally held steady across states, New Mexico (80 pregnancies per 1,000 women), Mississippi (76), Texas (73) and Arkansas (73) were singled out for the highest teen pregnancy rates.”

“The overall proportion of teenage pregnancies ending in abortion declined by one-third, from 46 to 30 percent, between 1986 and 2010.”

Janet Currie, writing for BloombergView, ponders the future for Americans and their health coverage under Obamacare.

“The evidence, then, suggests that Obamacare will probably entail some trade-offs. There may well be increases, not decreases, in the utilization of care, and this additional care may not be delivered in the most cost-effective way. So costs are likely to rise, unless policy makers or insurers adopt such measures as higher co-pays, tougher constraints on services provided, or ‘narrow networks’ that place limits on patients’ choice of doctors and hospitals. At the same time, the newly covered will probably be happier and healthier.”

Sarah Kliff: “Most people don’t purchase their own health insurance for very long; individual plans are more typically used as a bridge between other sources of coverage, usually employer-sponsored insurance.”

“One recent study in the journal Health Affairs found that, prior to Obamacare, only two-thirds of those in the individual market kept their policy for more than four months.” 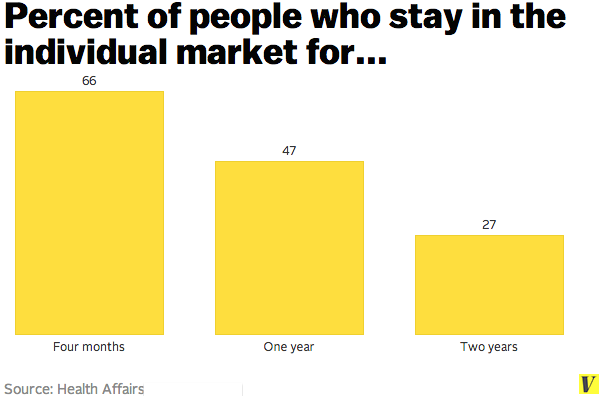 Gallup: “The uninsured rate for U.S. adults in April was 13.4%, down from 15.0% in March. This is the lowest monthly uninsured rate recorded since Gallup and Healthways began tracking it in January 2008.”

Jonathan Cohn: “Obamacare is reducing the number of Americans without health insurance. And while nobody can say for sure exactly how many people are getting coverage, Gallup just provided a pretty big clue… But Republicans and other critics of the health care law keep saying the law isn’t having much impact on the number of uninsured Americans. A few even suggest it’s having no impact at all. These arguments are just not credible anymore.”

Sarah Kliff: “The new polling data suggests that both the health care law – and the recovering economy – are having a pretty significant effect on the number of Americans with insurance coverage.”

Paul Krugman comments on the inability of Obamacare critics to concede they were wrong about its success:

“… they have in fact continued to do what they’ve been doing ever since the news on Obamacare started turning positive: sling as much mud as possible at health reform, in the hope that some of it sticks.”

“Now comes the latest claim [in a new survey] — that many of the people who signed up for insurance aren’t actually paying their premiums.”

“The fact that the survey was so transparently rigged is a smoking gun, proving that the attacks on Obamacare aren’t just bogus; they’re deliberately bogus. The staffers who set up that survey knew enough about the numbers to skew them, which meant that they have to have known that Obamacare is actually doing O.K.”

Krugman points out that these tactics work: “the constant harping on alleged failure works as innuendo even if each individual claim collapses in the face of evidence.”

“And that observation should scare you. What happens to the Congressional Budget Office if a party that has learned that lying about numbers works takes full control of Congress?”

The Atlantic: “Minnesota has the nation’s best-performing healthcare system, according to a Commonwealth Fund ranking released this week, and Massachusetts, Vermont, and New Hampshire are tied for second. Mississippi ranks last, just as it did on the previous ranking in 2009. Louisiana, Oklahoma, and Arkansas round out the bottom of the list.”

“Almost all states either stagnated or declined in performance since the survey was performed five years ago, and once again, Southern states scored especially poorly across all of the dimensions.”

Neil Irwin comments on a new report that studies the impact of Obamacare on the American economy.

“By 2020, about 90 percent of American workers who now receive health insurance through their employers will be shifted to government exchanges created by the health law, according to a projection by S&P Capital IQ, a research firm serving the financial industry.”

S&P estimates that the biggest American companies could save “$700 billion between 2016 and 2025, or about 4 percent of the total value of those companies. The total could reach $3.25 trillion for all companies with more than 50 employees.”

And savings could trickle down to employees: “… employers might decide to give their workers a stipend to pay for health insurance on the exchanges rather than sponsor a plan themselves.”

Michael G. Thompson, managing director at S&P Capital IQ: “We think that this process can ultimately yield some big savings for companies and take the responsibility and burden for health care out of their hands.”

Graph from The Fiscal Times.

New York Times: “The number of people signing up for health insurance through the federal marketplace soared in the final weeks before the enrollment deadline, exceeding the total number who had signed up in the prior five months, the Obama administration said Thursday.” The official number of enrollees was 8.02 million.

National Journal: “Here are the five states that signed up the highest percentage of their eligible residents, based on the Kaiser Family Foundation’s estimates of who’s eligible for exchange coverage:”

And the five that signed up the lowest percentage:

Zero Hedge: “Here is a shocker: for all the damnation Obamacare, which according to poll after poll is loathed by a majority of the US population, has gotten if it wasn’t for the (government-mandated) spending surge resulting from Obamacare, which resulted in the biggest jump in Healthcare Services spending in the past quarter in history and added 1.1% to GDP.”

NPR: “A recent study by Georgetown University and the Urban Institute predicts the ACA will enable up to 1.5 million Americans to leave their jobs and become self-employed, start new businesses or retire early. It’s a finding that runs counter to forecasts by critics of the federal health law, who contend it will cost the nation jobs and cripple America’s small-business economy.”

The NPR story profiles a number of families including Rebecca Murray whose career goals were hampered by her husband’s pre-existing medical condition.

“But under the federal health law, they now qualify for a subsidized policy that will cost $535 a month for the whole family. It’s not cheap, she says, but the coverage allowed her to quit her job and launch an online business to help other young women take care of sick loved ones.”

Politico: “A panel of health insurers agreed Tuesday that the number of insured people in the country has climbed by millions, despite arguments by some Republicans that the insured population has declined because of canceled plans.”

Karen Ignagni, CEO of the trade group America’s Health Insurance Plans said that “the rush of sign-ups late in the Affordable Care Act’s first enrollment period – which ended March 31 – were significantly younger than the earliest enrollees.”