“The rhetorical shift shows a fundamental change in the calculus of Obamacare: It’s one thing to talk about dismantling a theoretical law. It’s another to take away insurance that tens of millions of Americans now receive. And that’s exactly where Republicans are in 2016. So while Obamacare has barely made it onto the stage, it might just be the biggest winner of the debate season so far.”

“Now Obamacare has an army: More than 10 million Americans get coverage through the health law’s marketplaces and millions more through Obamacare’s Medicaid expansion. America’s uninsured rate has tumbled since the last time Republican presidential candidates took to a debate stage.”

“Democrats, meanwhile, will likely be more enthusiastic to discuss Obamacare than ever. In 2010, the party largely shied away from the health law after weathering bruising debates in Congress over “death panels” and abortion.”

The new Census figures “are the most solid evidence to date of the impact that the Affordable Care Act has had since its main coverage provisions took effect in 2014. They show that the share of people across the country who were uninsured throughout the year fell from 13.3 percent in 2013 to 10.4 percent last year.”

“Among the different sources of insurance, the biggest increase last year was among what the Census calls ‘direct purchase’ – people buying health policies on their own. That includes, though is not limited to, people buying health plans through the new federal and state insurance marketplaces created under the federal health care law. The share of coverage that was directly purchased increased by 3.2 last year to account for nearly 15 percent of those with health insurance.”

The Hill: “A huge majority wants Congress to keep the government open, regardless of whether that means providing funding to Planned Parenthood, according to a CNN/ORC poll released Monday.”

Kaiser Family Foundation 9/10/15 newsletter: “A new brief on the Peterson-Kaiser Health System Tracker finds that the quality of the U.S. health system is improving in many areas, but comparable countries continue to outperform the United States on key measures.”

“The likely source of this myth is a Planned Parenthood report that states it receives just over $500 million in public funds, which include grants from the federal government, states, and local governments. That’s a significant distinction. If conservatives on Capitol Hill want to slash the group’s federal funding, they will have a hard time finding the half a billion.”

“The most recent Planned Parenthood annual report “shows that about 41 percent of the organization’s budget comes from government grants and reimbursements … If you translate that graph into dollar figures, as this table does, the half-billion figure turns up.”

“The survey was commissioned by the American Lung Association, which supports the EPA’s proposed ozone rule, and found that 73 percent of voters favor stricter ozone limits.”

“The poll is meant to show support for the EPA’s efforts, proposed in November, to restrict the allowable levels of ozone in the air to between 65 and 70 parts per billion, from the current 75 parts per billion.”

Drew Altman: “In our August polling, we asked which health costs people with health coverage find to be the greatest burden. As the chart below shows, deductibles led a closely bunched list, followed by premium payments, drug costs and doctor visits. Deductibles have been rising steadily each year, especially for people who work for smaller employers, as insurance has gradually been moving from more to less comprehensive, with more ‘skin in the game’ for consumers. 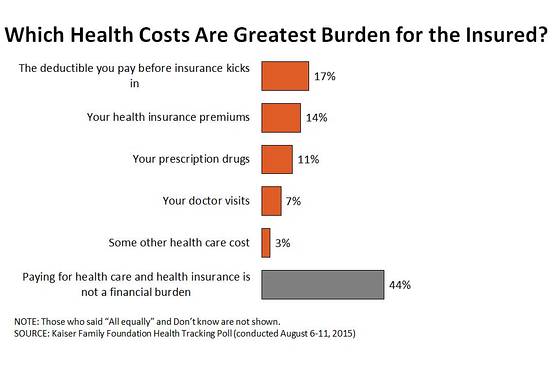 “Drug spending represents just 10% of overall health spending.  But the number of transactions people have with the health system is much larger for drugs than for physician visits or hospital stays or other services — and the cost is very immediate and tangible. Concern about drug prices is best understood as the tip of the iceberg of a larger concern consumers have about out-of-pocket costs.  It’s an example of a basic rule of health policy: Experts think more about national and government spending for health while people focus more on health care as a pocketbook issue.”

Sarah Kliff in Vox: “Abortion rights activists have long cheered Barack Obama’s presidency as a ‘historic victory for women’s health.’ But the reality has been rather different. Since 2010, getting an abortion in America has become significantly harder.”

“States passed a record 205 abortion restrictions between 2011 and 2013, more than the entire 30 years prior. As a result, many abortion providers are closing down. One survey, from pro-life group Operation Rescue, estimates that 87 separate locations ceased to perform surgical abortions in 2013. These changes are a clear result of pro-life mobilization in the Obama era.”

“Abortion clinics across the country are shuttering at an unprecedented rate — and one root cause is Obamacare.”

Elizabeth Nash, of the Guttmacher Institute: “Certainly the health reform debate pushed some states to adopt restrictions that they may not have otherwise adopted. Half the states have some sort of restriction on abortion coverage in insurance now.”

The Hill: “The Obama administration said Tuesday that 9.9 million people have ObamaCare coverage, a slight drop from the previous count of 10.2 million.”

“The new data are for people who have paid their premiums as of June 30, marking a drop-off from the number enrolled through March 31.”

“Both figures are down from the 11.7 million who signed up in the enrollment period this year, but a decline was expected from that figure, as not all of those people paid their premiums. The administration said it expects some further fluctuation as factors like gaining employer-based coverage or getting married could effect how many people need ObamaCare coverage.”

“California also edged past Florida for the title of state with the most sign-ups, at around 1.4 million and 1.3 million respectively.”

A report in the scientific journal Health Affairs estimates that the U.S. spends $4 billion a year “on unnecessary medical costs due to mammograms that generate false alarms, and on treatment of certain breast tumors unlikely to cause problems,” the AP reports.

The study “breaks the cost down as follows: $2.8 billion resulting from false-positive mammograms and another $1.2 billion attributed to breast cancer overdiagnosis. That’s the treatment of tumors that grow slowly or not at all, and are unlikely to develop into life-threatening disease during a woman’s lifetime.”

“Breast cancer is the second most common cause of death from cancer among American women, claiming nearly 41,000 lives a year. Annual mammograms starting at age 40 have long been considered standard for preventive care, because cancer is easier to treat if detected early. But recently there’s been disagreement about regular screening for women in their 40s. It parallels the medical debate about the pros and cons of prostate cancer screening for men.”

However, the Breast Cancer Research Foundation notes that while mammograms “are not perfect tests, BCRF’s scientific leadership… join the large majority of the scientific community in recommending that women of average risk take current screening guidelines—including annual mammograms starting at age 40—seriously.”

Washington Post: “During the first three months of the year, just 1 in 20 Americans said they did not get medical care they needed because they could not afford it, according to the U.S. Centers for Disease Control and Prevention.”

“The findings, from the federal National Health Interview Survey, show that 4.4 percent of people interviewed from January through March said they had skipped medical care in the previous year because of its cost — the lowest percentage in 16 years.” “The survey, conducted with people of all ages, does not explain the reason why fewer people are avoiding treatment because of its cost, but the improvement coincides with two big changes: Health insurance has become more common under the Affordable Care Act as government exchanges began nearly two years ago to sell private insurance policies for people who cannot get coverage through a job and as Medicaid for low-income people expanded in some states. At the same time, the economy has been recovering from the Great Recession of 2008-09, so more people are working.”

Jonathan Cohn: “New survey data, which the U.S. Centers for Disease Control and Prevention released Tuesday morning, suggests that just 15.2 percent of American adults are now using cigarettes on a regular basis. That smoking rate is nearly 2 percentage points lower than what the same survey reported for calendar year 2014. ” “This year’s reduction is part of a long-term trend that dates back at least 50 years, to when the surgeon general published a landmark report identifying smoking as a health hazard. Since that time, officials and public health advocates have been waging the policy equivalent of a full-court press against smoking.”

“Of course, some portion of the people who no longer smoke cigarettes have probably switched to using electronic cigarettes, the health effects of which remain the subject of intense debate even among scholars and anti-smoking activists.”

Margot Sanger-Katz: “The idea of developing a more national market for health insurance has become a major part of Republican health reform orthodoxy … Aside from repealing Obamacare, allowing insurers to sell their products across state lines appears to be the most popular health reform idea among the G.O.P. candidates.”

“The trouble with the idea is that varying or numerous state regulations aren’t the main reason insurance markets tend to be uncompetitive. Selling insurance in a new region or state takes more than just getting a license and including all the locally required benefits. It also involves setting up favorable contracts with doctors and hospitals so that your customers will be able to access health care. Establishing those networks of health care providers can be hard for new market entrants.”

“’The barriers to entry are not truly regulatory, they are financial and they are network,’ said Sabrina Corlette, the director of the Georgetown University Health Policy Institute.”

“Critics of the across-state-lines plan worry about negative consequences of letting insurers shop for the state regulator of their choice … Insurers may end up congregating in whatever state offers the most lenient regulations. That could mean that customers who get sick could be harmed because there are few comprehensive policies available, or because consumer protections are weak when things go wrong.”

Utah Public Radio: “According to a study released Thursday by the Pew Charitable Trusts, the average sentence for federal drug offenders has risen 36 percent since 1980. According to Adam Gelb, Director of Pew’s Public Safety Performance Project, that’s indicative of a broken justice system.”

“The number of federal prisoners with drug-related offenses has risen from 5,000 in 1980 to 95,000 today. That’s 49 percent of the prison population. Gelb said that the policies enacted over thirty years ago have not proven to be the best approach.”

Pew: “The best available data suggest that increased penalties for drug offenders—both at the federal and state levels—have not significantly changed long-term patterns of drug availability or use … The share of Americans age 12 and older who said in a national survey that they had used an illicit drug during the previous month increased from 6.7 percent in 1990 to 9.2 percent—or nearly 24 million people—in 2012.” 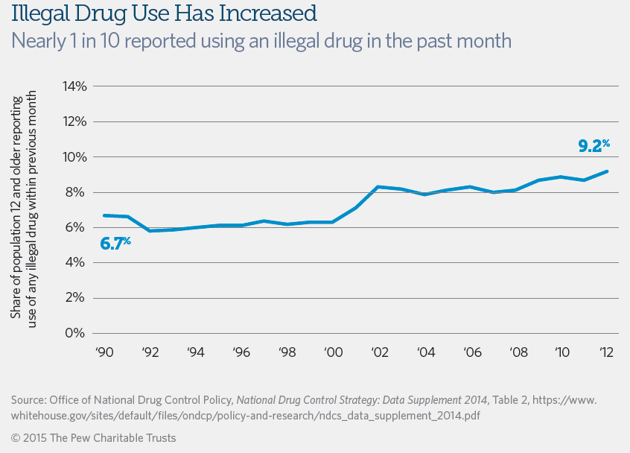