Drew Altman: “Have you noticed that Republican presidential candidates have spent far less time debating differences between their proposals? One reason: Republicans care less about detailed policy plans than do Democrats.” 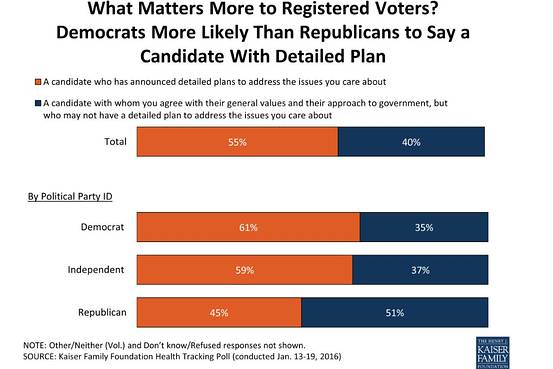 “When both parties have nominees and the campaign moves into the general election, the candidates will face greater pressure to produce policy plans on major issues … Overall, 55% of registered voters say that it matters more to them if a candidate has a detailed plan to address issues they care about than a candidate’s general values and approach to government, vs. 40% saying they care more about general candidate characteristics than policy plans.”

“Now, a growing number of environmentalists, engineers and industry watchdogs say the disaster on the outskirts of Los Angeles could happen elsewhere. There are  more than 400 underground natural gas storage sites spread across 31 states, and, like Aliso Canyon, decades-old equipment is deteriorating at many of them.”

“There is little federal oversight for the storage of trillions of cubic feet of potentially explosive fuel that is also a potent greenhouse gas. More than 100 facilities like Aliso Canyon that are owned and operated by local utility companies are subject to a patchwork of state regulations, which vary significantly from state to state.”

Vox: The chart, by Vox’s Javier Zarracina, shows Dylan Matthew’s estimates of how Bernie Sanders would change marginal tax rates on wages, both from payroll taxes and from income taxes.

“Most taxpayers would see a single-digit increase in their marginal tax rate. People with taxable income below $250,000 would see an 8.8 percentage point increase.”

“But the very rich would see eye-popping increases in marginal rates: from 36.8 percent to 62 percent for people with taxable income between $250,000 and $413,350. The big change here is applying the Social Security payroll tax, which adds another 12.4 points.”

“Even more dramatic are Sanders’s proposed increases to capital gains taxes … Bernie would hike the top rate to 64.2 percent and the rate for many making upper six figures to 49.2 percent.”

Wall Street Journal: “It should be no surprise that the Congressional Budget Office projections published this week are as bad as they have become. More than $100 billion was added to the deficit projection for this year alone, much of it from the spending-and-tax-cuts bonanza Congress and the president went on last year. Going forward, more than $10 trillion is projected to be added to the debt by 2026.”

“This makes putting together a meaningful budget resolution all the more difficult. Last year Republicans passed a budget resolution that got to balance by 2024. But it was so tough to stick to that policy makers ignored many of the major components of their own budget. They failed to follow through on any major entitlement savings and ultimately passed almost $700 billion worth of taxcuts that weren’t in their budget. The same lawmakers who agreed to a budget that had $5.8 trillion in savings over 10 years added $750 billion to the debt instead.”

“This year they will need to find an additional $2.2 trillion in savings if they want to get to balance in 10 years. Realistically speaking, that’s just not going to happen.”

Pew Research: “As Barack Obama begins his final year in office, the goal of reducing the budget deficit, which the public once ranked among the most pressing objectives for his administration, has continued its recent decline in perceived importance.”

“The latest national survey by Pew Research Center, conducted Jan. 7-14 among 2,009 adults, finds that strengthening the nation’s economy and defending the country from future terrorist attacks rank atop the public’s priority list: 75% each say these should be top priorities for the country. These also were the public’s two most important policy goals in 2015.”

Vox: “The problem of lead exposure among children is not a local Flint story … The data that is available shows that lead exposure is a pervasive issue in the United States. In some places outside of Flint, more than half of children test positive for lead poisoning.”

“Nine counties nationwide told the CDC that 10 percent or more of their lead poisoning tests came back positive. Four of them are in Louisiana, two in Alabama, and the rest scattered across West Virginia, Kentucky, Indiana, and Oklahoma.”

“These are places that have told the federal government they actually have higher rates of lead poisoning than Flint, where officials say the number hovers around 4 percent. But these aren’t places we talk about that much.”

“The map above uses CDC data to show lead poisoning rates across the country. The reason so many of the counties are light gray is that most counties simply don’t report this information — nor are they required to.”

Ronald Brownstein in The Atlantic: “The cul­tur­al and demo­graph­ic gulf between the Re­pub­lic­an and Demo­crat­ic elect­or­al co­ali­tions can now be meas­ured not just in space, but in time.”

The Hill: “The average ObamaCare premium rose to $408 per month for 2016 plans, about a 9 percent increase from this time last year, according to a new report from the Department of Health and Human Services.”

“However, 83 percent of ObamaCare enrollees pay far less than $408 because they get tax credits under the healthcare law. The average tax credit for 2016 is $294, meaning that the average share of the premiums that enrollees have to pay is $113. That is up $8 from the $105 people paid on average last year.”

“As Republicans highlighted, premium increases for certain plans in some states were far higher, as much as 40 percent. But the report released Thursday shows that on average premium increases were less than that, and tax credits helped reduce the burden even more.”

“The administration touted the tax credits as showing that plans are affordable, as the Jan. 31 deadline to sign up for 2016 coverage nears. Officials also emphasize that people can save money by actively shopping around for the best plan.”

Wall Street Journal: “The real-life “Mayberry” is adding millionaires at the fastest pace in the country. As Andy Griffith’s birthplace, Mount Airy, N.C., claims to be the inspiration for the town featured in the 1960s television classic “The Andy Griffith Show”—but folks there have more than just southern charm in common the late actor. They’re also increasingly millionaires.”

“The Mount Airy metro area’s population of millionaire households grew by 332, or almost 30%, between June 2014 and June 2015, the quickest rate in the country, according to a report Phoenix Marketing International released Tuesday.”

“Just 3.8% of households have a million dollars or more in assets, below the national average of 5.4%. But its impressive growth of high-net-worth families likely reflects that well-off retirees are moving there in search of quintessential small-town life, said Randy Collins, Chamber of Commerce president.”

“Among states, North Dakota recorded the fastest growth in millionaires in June 2015 from a year earlier, increasing more than 10%. The growth reflects rising wealth tied to the oil industry, which has slowed sharply in the past six months. “

Megan McArdle in Bloomberg asks how Sanders proposes to pay for his health-care plan.

“National Health Expenditure data … says we spent about $3 trillion on health care in 2014 from all sources … Now the government already spends $1.3 trillion, or thereabouts, so … that leaves us with about $1.7 trillion to go. Yet Sanders claims that his plan, despite providing vastly more generous health benefits than basically any plan in existence, will cost only $1.35 trillion a year. That’s a pretty big gap. How does he get there? ‘Reforming our health-care system, simplifying our payment structure and incentivizing new ways to make sure patients are actually getting better health care will generate massive savings.’”

Sanders “has proposed a Magic Asterisk worth a third of a trillion dollars a year … But of course, it would be DOA anyway … Sanders won’t easily persuade congressional Democrats to embark upon another such bruising, vote-losing political battle.”

“The very fact that Sanders relies on the Magic Asterisk shows us just how impossible single payer is in this country. Even Sanders — its fondest supporter, who never met a high-income tax he didn’t like — knows he can’t be upfront about the cost and raise taxes accordingly. If Sanders won’t do it, then no one else will either.”

“Single payer’s off the table, for now and for the foreseeable future. The only place you’re going to see it is on Bernie Sanders’s website.”

Ecowatch: There is unlikely to be any respite from the increase in global temperatures—”scientists expect 2016 to be even warmer than 2015.”

“In a joint summary with former head of NASA GISS, Dr. James Hansen, Schmidt says 2015 global temperature ‘smashed the prior record’ and ‘should practically terminate’ discussion of any slowdown in the pace of global warming.”

“Yesterday’s news that 2015 was the hottest year on record comes as no great surprise. Perhaps what’s most remarkable is how much hotter it has been.”

“Given the strength of the current El Niño, we expect 2016 to be even warmer globally than 2015. The lagged effects of El Niño are already starting to appear in the monthly temperature observations which are registering more than 0.8 degrees above norm in recent months. This is consistent with our forecast for unprecedented warmth in the coming year. Overall, we expect El Niño to contribute around 25 percent to what will most likely be a new record global temperature in 2016. Much of the rest is down to climate change.”

The Kaiser Family Foundation 1/21/16 newsletter reports that “on the eve of the anniversary of the Roe v. Wade decision, a new Kaiser Family Foundation analysis finds 25 states either bar abortion coverage in Affordable Care Act (ACA) marketplace plans or limit it to cases of rape or incest or when the woman’s life is endangered. In an additional six states, no 2016 ACA plans offer abortion coverage despite the absence of state legislative restrictions (Delaware, Iowa, Minnesota, Nevada, West Virginia and Wyoming). In three states without bans, plans that include abortion coverage are unavailable in at least one county (Colorado, Illinois and Texas).”

Christopher Ingraham: “The counties shaded blue are the 462 least densely populated counties of the nation. None of them have a population density greater than 7.4 people per square mile. In 65 of these counties, the density is less than one person per square mile.” “The least-populated place in the United States is Alaska’s Yukon-Koyukuk Census Area. At over 145,000 square miles, it’s larger than New York, Pennsylvania, Maryland and Virginia — combined. But it’s home to only 5,547 people, for a population density of fewer than 4 people every 100 miles.”

Politico: “The Earth’s temperatures reached the warmest level in more than a century of records, breaking the previous high mark set in 2014, federal scientists said Wednesday.”

“The data is the latest to show the upward trend in the Earth’s temperature, which scientists say is caused by the buildup of greenhouse gases like carbon dioxide and methane in the atmosphere.”

“Overall, 2015 global temperatures rose by 1.62 degrees Fahrenheit over the 20th century average, reaching the highest level in 136 of record-keeping, the National Oceanic and Atmospheric Administration and NASA said. Last year’s temperatures surpassed the 2014 record by a wide 0.29-degree margin.”